In April 2017, the Supreme Court of Colombia established that the review of congruence of an international award, within annulment proceedings, should be measured in accordance with the scope of the arbitration agreement and not with the claims made in the request for arbitration.

On 18 April 2017, the Supreme Court of Colombia dismissed an annulment request filed by Mexican and Colombian companies that were part of the consortium ‘CICE’ against an award rendered in an arbitration before the Conciliation, Arbitration and Amicable Composition Center of the Chamber of Commerce of Medellin for Antioquia.

The litigation revolved around the termination of a construction agreement (hereinafter the ‘Agreement’) executed between CICE and Consortium Bauer comprised of Colombian companies (‘COBA’).

The Grounds for annulment

CICE argued, among other things, that the Tribunal issued an arbitration award that was incongruent with COBA’s claims, as included in its request for arbitration. A summary and comparison of COBA’s claims and the Arbitral Tribunal’s decision are presented below: 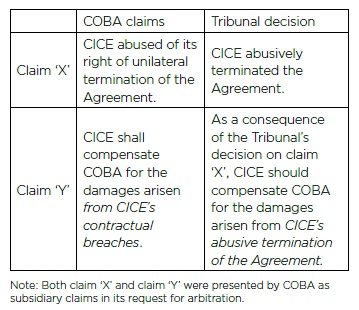 CICE raised an incongruence between COBA’s claim ‘Y’ and what the tribunal granted when conceding the relief sought for claim ‘Y’, requesting the annulment of the award according to Article 108 of the Colombian Arbitration Law literals (b) (c) and (d) of numeral 1, and literal (b) of numeral 2.

Article 108 of the Colombian Arbitration Law is almost a textual incorporation of the provisions of Article V of the Convention on the Recognition and Enforcement of Foreign Arbitral Awards (New York, 1958) which explains the motives to refuse the recognition and enforcement of an award, and reads as follows (free translation):

The recognition of an award, regardless of the country in which the award was issued, can be rejected only in the cases and by the motives that are restrictively listed below:

1. At the request of the party, when the requesting party demonstrates:

b. The party against which the arbitral award is invoked was not duly notified of the designation of an arbitrator, of the initiation of the arbitration proceeding, or could not -by any reason- assert its rights (…) .

d. The composition of the arbitral tribunal or the arbitral procedure did not comply with what is established in the arbitral agreement, or, in its absence, to the law of the country where the arbitration was conducted or carried out (…).

b. The recognition or enforcement of the award would be contrary to Colombia’s international public order (…).

The Supreme Court of Colombia dismissed the annulment request on all grounds, as explained below.

Regarding Article 108 numeral 1(c), the Court considered that it was important to distinguish between the notion of congruence under Colombian Procedural Law and the one that should be considered when reviewing an annulment request for an international award.

Regarding Article 108 numeral 1(b), the Court considered that allegations of incongruence by CICE were not admissible for an annulment request under this numeral, as such allegations referred to the content of the arbitral award and not to procedural irregularities during the arbitral proceeding. Additionally, the Court highlighted that, although CICE had the opportunity to raise such grounds in the course of the arbitral proceedings, they were raised for the first time at the request for annulment stage and were therefore untimely1.

Regarding Article 108 numeral 1(d), CICE claimed that the Tribunal should have established the claims and issues raised in the arbitration and that such procedural rule had been unobserved by the Tribunal. The Court dismissed this claim and clarified that the delimitation of issues to be decided was not a procedural rule, but an essential characteristic of arbitration, and that its violation should constitute an annulment ground under Article 108 numeral 1(c), mentioned above, and not under numeral (d).

Regarding the ground of annulment for violation of public order, under Article 108 numeral 2(b), the Court clarified that such ground was not applicable to congruence, as the principle of congruence when deciding a case is neither a fundamental principle of Colombia’s legal system, nor an autonomous and inalienable right on which due process rests. Therefore, a violation of the principle of congruence would not lead to a transgression of Colombia’s international public order.

Keeping in mind some helpful tools: It is very important to keep in mind the tools that help to avoid a lack of congruence between the arbitration agreement, the request for arbitration and the arbitral award. For instance, the ICC Arbitration Rules establish guidelines for the content of the Terms of Reference as follows:

…, the arbitral tribunal shall draw up … a document defining its Terms of Reference. This document shall include the following particulars:

c) a summary of the parties’ respective claims and of the relief sought by each party, together with the amounts of any quantified claims and, to the extent possible, an estimate of the monetary value of any other claims;

d) unless the arbitral tribunal considers it inappropriate, a list of issues to be determined;

Congruence still matters: It is very important to note that the Supreme Court reviewed CICE’s claims within an annulment request. Although a lack of congruence between what is claimed in a request for arbitration and what is granted in the award is not always a valid ground for annulment, congruence still matters as Article 79 of Colombia’s Arbitration Law grants an opportunity for raising objections on this ground,3 and as this is taken into consideration by arbitration rules, such as the mentioned guidelines for the content of the Terms of Reference in the ICC Arbitration Rules.

1
Article 79 of Colombian Arbitration Law, applicable to international arbitration, establishes: ‘The exceptions or objections should be raised no later than when the answer to the request for arbitration is filed. The fact that the party did not designate an arbitrator nor participated in the designation of the arbitrators does not impede the party from raising the objection. During the arbitral proceeding, objections based on the allegation that the Tribunal exceeded its jurisdiction shall be raised as soon as the matter for which the Tribunal allegedly surpassed its jurisdiction is presented in the proceeding (…)’ [free translation]. 2
The congruence review of an award is based on the request for arbitration in national arbitration (Law 1563 of 2012, Article 41 numeral 9(c) and based on the arbitration agreement in international arbitration (Law 1563 of 2012, Article 108 numeral 1(c). 3
See supra note 1.