As part of a drive towards greater transparency, ICC last year started publishing details about the composition of tribunals in ICC arbitration proceedings. Harout Samra and Cecilia Azar, respectively associate and partner at DLA Piper, analyse the appointment data published so far.

Arbitration practitioners have progressively come to recognise the importance of increased transparency in preserving confidence and ensuring arbitration’s continued growth and acceptance around the world.

To a significant degree, 2016 was the year of transparency, with numerous important developments around the globe, including ICC’s ground-breaking decision to publish the names of arbitrators serving in cases administered by it. This decision, adopted unanimously and announced in December 2015, applies to arbitrations registered with the ICC Court from 1 January 2016.

The list, first published on ICC’s website in June 2016, includes each arbitrator’s name, nationality, position on the tribunal, and appointment method. The list also states whether the arbitrator remains involved in the case and if the case is pending.

ICC does not publish the case reference number or the names of the parties or counsel, so as to preserve the confidentiality of the proceedings, which is an important factor that parties frequently seek through arbitration. Moreover, parties have the additional option, by mutual agreement, to opt out of even these limited disclosures to preserve their privacy interests.

The 75 three-member tribunals present a more complex, but fascinating picture. Of the 151 co-arbitrators (one arbitrator was replaced), only 6 were appointed by the ICC Court. The rest, as would be expected, were designated by the parties to the arbitration.

Among the most important benefits resulting from the ICC’s movement towards transparency is substantially greater clarity regarding arbitrator diversity. In particular, gender diversity among arbitrators remains a significant concern and – despite data revealing that considerable work must still be done to improve the balance – it is clear that change is under way.

A total of 51 women were appointed among the 313 appointments. This represents a rate of approximately 16%. Among the 145 co-arbitrator nominations by the parties, only 17 were women (11%). 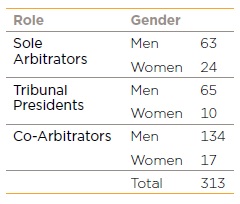 Much of this data is consistent with a study conducted in September 2016 (http://kluwerarbitrationblog.com/2016/09/13/icc-arbitrator-appointments-a-first-look-at-the-data), particularly with regard to the strong role played by ICC as an institution in recent years in promoting diversity among its appointments.

The Pledge initiative (http://www.arbitrationpledge.com/) has significantly contributed to this laudable movement. To date, the Pledge has 1,658 signatories, including numerous bar associations and arbitral institutions.

In addition to gender diversity, ethnic and national diversity remains an area of great interest and, at times, concern. Several of the ‘usual suspects’, including the United States, France, and the United Kingdom, receive notably high rates of appointments, but this is to be expected given their high rate of participation in ICC proceedings. As in the September 2016 study mentioned above, Switzerland is remarkably well represented, with Swiss arbitrators appointed 45 times (approximately 15%). Overall, however, the list of arbitrators reveals an outstanding number of countries represented, including from throughout Latin America, Asia, and Eastern Europe.

ICC’s decision to publish the list of arbitrator appointments has provoked considerable dialogue among arbitration practitioners around the globe. It has fostered noteworthy discussions concerning issues such as confidentiality and diversity, which have and will continue to stimulate efforts to reinforce arbitrator diversity. Such efforts have proliferated in recent years and will continue to gather strength, at least in part based on the additional data available today.

Under the leadership of the President of the ICC Court, this transparency initiative has placed ICC at the forefront of institutions seeking to make arbitration more open and accessible. Coupled with the record-setting number of cases in 2016, ICC is making great strides.