During the meeting with Justice Guixiang Liu, Mr. Mourre shared updates on ICC arbitration developments, including the latest revision of the ICC Arbitration Rules and the opening of case management offices in Brazil and Singapore. Justice Liu highly commended the quality of the arbitration services that ICC has been providing to the business community in the past century and recognized the importance of jointly promoting amicable dispute resolution for the Belt and Road Initiative, a national program driven by the PRC government that will bolster growth in the entire region and provide great benefits to the global economy. Mr. Mourre took this opportunity to invite Justice Liu and his colleagues to attend the Court’s plenary sessions, taking place in Asia or in another region, which will contribute to an increased exposure of the PRC’s judiciary before the international arbitration community. Justice Liu was pleased to accept the invitation. 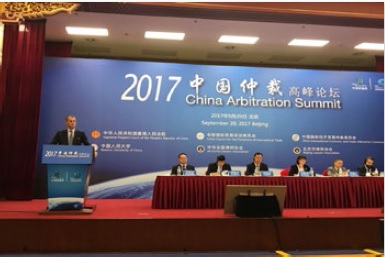 At the meeting with Mr. Chenggang Li, Assistant Minister of Commerce, Mr. Mourre emphasized the importance of liberalising the arbitration market to the PRC users and beyond, in particular in the context of the Belt and Road Initiative. Mr. Li was in agreement and confirmed to Mr. Mourre, as he previously did in public fora, that competition in the PRC market of arbitration services was in the best interest of both local and international arbitration service providers and that PRC’s Ministry of Commerce would continue welcoming such competitions in PRC, although it could take some time to achieve the goal of liberalisation of arbitration services. Mr. Li also expressed the interest of PRC’s Ministry of Commerce in ICC’s practice relating to investment treaty arbitration after Mr. Mourre’s presentation.

In addition to the meetings, Mr. Mourre was also invited by the organizers of ‘China Arbitration Week’ to join a panel discussion on the improvement of judicial and arbitration environment in the context of the ‘Belt and Road Initiative’ at the China Arbitration Summit 2017. Mr. Mourre was joined, among others, by Mr. Yongjian Zhang and Mr. Xuefeng Ren, respectively Chief Justice and Senior Justice of SPC, Dr. Michael Hwang, Chief Justice of DIFC Courts and member of the ICC Court, and Mr. Jingzhou Tao, member of the ICC Court.