Gisèle Stephens-Chu, Senior Associate at Freshfields Bruckhaus Deringer LLP in Paris, reports on the event that took place in the Palais de Justice of Paris on 27 April 2017 to mark the Paris Bar’s commitment to the Equal Representation in Arbitration ‘Pledge’. 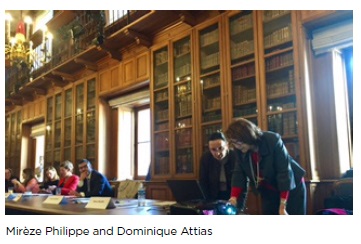 On 27 April 2017, the Paris Bar lent its support to the Equal Representation in Arbitration Pledge, during an event that took place in the splendid setting of the Bibliothèque de l’Ordre des Avocats in the Palais de Justice.

Following a presentation by Gisèle Stephens-Chu of the background to and objectives of the Pledge, the Vice-President (Vice-Bâtonnière) of the Paris Bar, Dominique Attias, signed the Pledge, stating that a better representation of women across the legal profession as a whole was of critical importance to the Bar.

The panel of speakers, moderated by Isabelle Michou, then provided a whistle-stop tour of key statistics and initiatives to improve diversity at the level of arbitral institutions, counsel, corporations and the Paris Bar, and some thought-provoking reflections on ‘unconscious bias’ and the reasons for promoting diversity, both within and beyond the world of international arbitration, as a means of improving representativeness and the substantive content of decision-making.

Recent statistics and initiatives to improve diversity across the international arbitration community show that the debate first initiated by ArbitralWomen, 1 and given increasing momentum through the ‘Pledge’, is now firmly on the community’s agenda. However, there is still room for improvement in the composition of arbitral tribunals and the representation of women in international arbitration.

To continue this debate with the Paris legal community and the Paris Bar, another conference on diversity will be organised on 12 April, during the 2018 edition of Paris Arbitration Week (see www.parisarbitrationweek.com).

1
A report of this event has been published in the ArbitralWomen Newsletter dated July 2017, available at http://www.arbitralwomen.org/DesktopModules/Bring2mind/DMX/Download.aspx?EntryId=459&Command=Core_Download&language=en-GB&PortalId=0&TabId=2129.