Nelson Dijoux Coquillas, Associate at White & Case LLP in Paris, reports on the event hosted by the firm on 25 April 2017 where members of the panel discussed Africa’s relationship with international arbitration, perspectives of development and how the continent’s cultural, legal and linguistic diversity is grasped by the arbitration community. 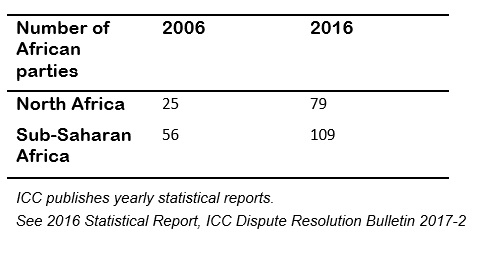 The proceedings are not however generally between African counterparties, but rather involve one party from Africa and one other from a different continent.

The number of cases involving public entities rose by about 300 percent since 2011. Unsurprisingly, in construction cases involving roads, power plants or hospitals, they are most often the respondents.

Francophone, lusophone and anglophone African laws are now more frequently chosen as the applicable law to the dispute, whereas parties traditionally turned to French and English law. As to the seat of arbitration, construction cases generally involve local seats, even though francophone and lusophone Africa still tend to select Paris. Between 2007 and 2016, African cities were chosen as seats in 75 ICC cases.

African cities are rarely picked as arbitral seats as they are perceived as unstable and prone to war or insurrection. The argument is however untrue, as more and more expats and companies settle and invest in Africa. The often raised corruption factor is also debatable as, for example, Botswana has a better ranking than Spain, Italy or Greece in the Corruption Perception Index released by Transparency International. Finally, the judiciary is often said to be less competent, but this can also be overcome for instance by waiving annulment proceedings.

Unfortunately, African arbitrators are also rarely appointed. As of 31 December 2016, ICSID appointments (of arbitrators, conciliators or ad hoc Committee Members) covered 88 appointments for the whole continent but at least 108 appointments for Switzerland alone (excluding bi-nationals). African arbitrators are unjustifiably seen as incompetent and have to face ‘unconscious’ or ‘implicit’ discrimination. Indeed, they are only appointed in arbitration cases involving an African party, whereas nobody ever argued that European arbitrators should only be nominated in cases involving European parties. Remedies could include the introduction of arbitrators’ fees as a criterion during the selection process, the use of anonymous CVs for arbitrators, or the promotion of bilingualism in arbitral proceedings (English and local language) by requiring a native on the arbitral panel.

Finally, counsel also suffer from this unconscious or implicit bias, as parties often engage foreign big law firms (or the local offices thereof). A solution could arise from Tunisia’s request that a local counsel be involved in ICSID proceedings (‘local content requirement’).

Achille Ngwanza presented the strengths, weaknesses and main avenues of reform of OHADA, the organisation created in 1993 to develop Africa’s business attractiveness, and which now includes 17 Member States.

The two arbitration related instruments of this organisation, which are the Uniform Act on Arbitration (a model law for the member states to adopt) and the Arbitration Rules, have embraced the fundamentals of modern arbitration standards such as the separability of arbitration clauses, the competence-competence principle or the independence of arbitrators (who have been granted diplomatic immunity). These characteristics make ‘OHADA arbitration’ attractive, all the more so as the Uniform Act allows investors to navigate throughout different but similar arbitration legislations.

However, some weaknesses have been pointed out. Judges from the OHADA Common Court of Justice and Arbitration, originally judges from member states’ supreme courts, have perfectible arbitration skills; the OHADA arbitration legislation comes in addition to very heterogeneous domestic laws (e.g. regarding the competence of national courts to order provisional and conservatory measures) and the instruments do not, as of now, make a distinction between domestic and international arbitration.

Rukia Baruti shared her views on the regional and pan-African perspectives in investment arbitration. To achieve regional integration in Africa, several investment agreements have been entered into in the last few years such as the 2007 Investment Agreement for the Common Market for Eastern and Southern Africa (‘COMESA’) Common Investment Area, the 2006 Southern African Development Community (‘SADC’) Protocol on Finance and Investment and the SADC Model BIT, and on the continental level, the 2015 Pan-African Investment Code (‘PAIC’). The investment agreements share a common trend: restricting recourse to arbitration by preventing disputes from arising.

Some of these investment agreements do not include the standard ‘fair & equitable treatment’ clause, and contain several exceptions allowing host states to take regulatory measures. These instruments also require attempting amicable settlement and exhausting local remedies before arbitration is initiated .These investment agreements also bear differences, mainly on the definition of ‘investors’ (which is not necessarily only national of member States) and investments (which can be ‘enterprise-based’ or ‘asset-based’).

Noteworthy, arbitration arising under the PAIC must be seated in Africa. In Rukia Baruti’s view, the characteristics of these instruments indicate that the African countries view investment arbitration as a trap today rather than an opportunity.

Tolu Obamuroh drew a general picture of the 72 arbitral institutions in Africa, the rules of most of which are modelled after the UNCITRAL Arbitration Rules. More and more cases are handled by these institutions (e.g. 1109 cases for the Cairo Regional Center for International Commercial Arbitration since 1987, and 52 cases – one third involving international parties – for the Kigali International Arbitration Centre since 2012).

Despite the progress made by the top institutions, a majority of African-related disputes are seated outside of Africa and handled mostly by the ICC and LCIA. The reason why African institutions do not come close to these figures may be that Africa is perceived as facing systemic challenges of undue delay, competence and corruption issues that make the continent unattractive as a seat of international arbitration, even to African parties.

Therefore, the proliferation of arbitral institutions – as opposed to increasing the quality and efficiency of the existing institutions – is not the answer. To achieve that goal, arbitral institutions should start taking advantage of the distinction between ‘seat’ and ‘venue’ of the proceedings and market themselves as ‘venues’ for international arbitration to begin with. This will help them develop institutional competence as well as enhance their reputation among users and practitioners. Institutions should also lead the call for the reform of arbitration laws and practice, and work with governments to ensure that criteria for safe and attractive seats are in place (modern arbitration law, independent judiciary, legal expertise, rights of defence, education, accessibility, safety, facilities, ethics, enforceability, immunity of arbitrators).

The panellists and the audience concluded that Africa has a major role to play in international arbitration – just as all other continents. Africa is clearly capable of meeting the standards set by the international community to ensure the proceedings are dealt with safely and efficiently. But this can only be achieved once the implicit bias and misconception of Africa’s legal systems – also coming from African parties – are fought against and removed.