Raphael Kaminsky and Asha Rajan, respectively Partner and Associate at Teynier Pic, report on the event hosted by Vannin Capital, August & Debouzy and the Sorbonne Law School that took place at the University of Panthéon-Sorbonne on 27 April 2017. The discussions, moderated by Marie Danis (Partner, August & Debouzy) and Yasmin Mohammad (Senior Counsel, Vannin Capital) addressed the various facets of third party funding and the emerging issues within the context of institutions and different jurisdictions.

Mathias Audit and Sylvain Bollée (Professors at the University of Paris Sorbonne) opened this conference by noting that the debate surrounding third party funding (TPF) has greatly evolved in the past ten years. It gained prominence in common-law countries, but remained unnatural to civil lawyers for a while. For instance, in France, where court justice is cheap, the cost of arbitral justice however, led to the creation of a market for funders. In the past decade, concerns of confidentiality, conflicts of interest in the context of TPF have been debated and now the legitimacy of the practice is almost unanimously accepted, thereby moving the debate to the next frontier where parties, practitioners and funders must grapple with questions relating to measures of security for costs and division of costs between parties where one party receives funding.

Charles Nairac (Partner, White & Case LLP, Paris) introduced the scope of discussions with excellent bird’s eye view of TPF in international arbitration. Before tracing the evolution of TPF as a practice in both common and civil law jurisdictions, Mr Nairac invited the audience to envisage certain atypical TPF arrangements such as the financing by a party’s bank or by issuing bonds to the capital market, etc. He noted that this practice catered primarily to claimant-parties’ need for financing, leaving respondents out of the picture. Mr Nairac then looked at the impact of TPF on arbitral justice and on arbitral due process. The issue of disclosure of the use of TPF was raised, to which he seemed favourable while also recognizing that it could go too far and therefore, did not advocate for systematic disclosure. The question of regulating TPF was also put to the audience and its eventuality was acknowledged, depending on its evolution and the level of intervention by State-legislatures. In concluding his keynote address, Mr. Nairac pondered the face of TPF over the coming years, examining in turn, the possibility of law-firms setting up their own in-house funding channels, and the potential trading and securitisation of claims. However, he recognised that a dilution of justice was unlikely as long as the stakeholders in TPF strived to uphold the best interests of the parties seeking recourse in arbitration and the principles of adversarial justice.

The first two speakers discussed the various facets of the ethical concerns arising from TPF. In parallel, the GCs raised questions and concerns from a client’s perspective. 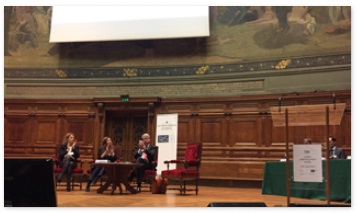 The panel focussed on the following aspects of the subject: the contribution of TPF to increase access to justice for parties, the notion of attorney-client privilege and the relationship between the lawyer, the client and the funder, and finally, confidentiality of documents and evidence.

The panel looked at the possible sources of law that might impose ethical obligations on the different stakeholders in TPF arrangements such as the rules of professional conduct applicable to lawyers.

Discussions also addressed the impact of the presence of a funder on attorney-client privilege. Mr Angelet and Mr Commission agreed that the primordial duty of a lawyer was towards the client, in spite of the funder being the cost-bearing and fee-paying entity. In this regard, the speakers discussed the resolution of the Paris Bar on TPF, adopted in February 2017.

The speakers discussed the scope of privilege and the channels of communication. In so doing, the GCs expressed their preference for always being included in the communication channel and the panel agreed and recalled the sacrosanct nature of the relationship between a lawyer and the client.

The panel then looked at existing jurisprudence in the US on the scope of privilege in TPF arrangements, non-disclosure agreements and common law doctrines such as work-product and common-interest doctrines that further define the scope of such protection.

The panel also examined the question of disclosure through the prism of ethics. The speakers recalled that funders themselves increasingly incite parties to disclose the presence of a funder to the tribunal, and furthermore, new BITs and MITs specifically call for funded parties to make such disclosures.

The second panel examined the financial considerations involved in and arising from TPF, and like the first panel, considered concerns raised by the clients.

The panel first described the traditional methods of funding used by parties, such as insurance, loans, contingency arrangements or transfer of claims to third parties and how the mechanism of TPF then developed as being seen as an intermediary solution.

The panel acknowledged that there is no existing law on TPF and that, often, lawyers still confuse TPF with vulture funds. The panel also examined the question of the nature or qualification of the funding agreement and recalled that several French and international institutions have looked at the matter.

Discussions also referred to the various scenarios in which parties may seek recourse to TPF. The panel, with invaluable input from the GCs, explained that, in addition to impecunious clients who sought recourse to TPF, solvent entities also often accept funding in order to manage risk or to maintain a healthy cashflow.

The panel then looked at potential legal and ethical implications that may result from the new types of funding. This panel was particularly enlightening as it delved into the effect of receipt of the funding on the client’s balance-sheet, which is significant due to the ensuing perception of financial health of the company involved in an arbitration, in the eyes of the creditors (concerned about the company’s ability to repay loans) and shareholders (concerned about the company’s future profitability).