The 37th Annual Conference of the ICC Institute of World Business Law gathered international business practitioners, legal experts and academics to deliberate on the topic of ‘Expedited Procedures in International Arbitration’. Céline Greenberg, an independent arbitration practitioner, reports on this event, which gave rise to the latest Dossier of the Institute (http://store.iccwbo.org/) received by each of the participants on the day of the conference.

As Chair of the Institute, Yves Derains (Founding Partner, Derains & Gharavi, Paris) introduced the Institute’s annual meeting. Co-Chair of the day along with Laurent Lévy, Michael Polkinghorne (Partner, White & Case LLP, Paris) then opened the discussions on the topic of the day: Expedited Procedure Provisions (EPP) introduced in the ICC Rules of Arbitration effective from 1 March 2017.

Exploring the meaning of the word ’expedite’, Mr Polkinghorne noted that it was commonly defined as to ‘speed up’ or ‘accelerate’ the procedure, but may also hint at verbs such as to ‘precipitate’ or ‘rush’, both of which highlight the edge on which EPP stands.

The first panel, comprised of Yas Banifatemi (Head of Public International Law, Shearman & Sterling LLP, Paris), Therese Isaksson (Partner, Lindahl, Stockholm) and Alexander G. Fessas (Secretary General of the ICC International Court of Arbitration), tackled the ‘rules and practice’ of expedited proceedings. Discussing the results of a survey on the expectations of arbitration users, Yas Banifatemi emphasised the perceived need for simplified procedures where the amount in dispute was below a certain value as well as the perceived standardisation of arbitration. Meeting the users’ expectation for celerity is a challenge, she noted, as it is not rare for a dispute involving a high amount to be simple in substance, or for a dispute involving a small amount to be complex. Nonetheless, many arbitral institutions have introduced expedited rules to address these expectations, with varying conditions of application, terminologies and underlying philosophies.

Turning to more technical aspects of the EPP, Alexander G. Fessas shared with the audience that the ICC Court was yet to use its power to override an arbitration agreement expressly providing for three arbitrators and proceed to appoint a sole arbitrator in an EPP case, as provided in the ICC Rules. This was notably due to the fact that parties generally agree on the appointment of a sole arbitrator in light of the parameters of the dispute. He stressed that the ICC Court would only make use of this power after considering the law of the seat to preserve the enforceability of the award.

The panel’s presentations prompted the active participation of the audience. Pierre-Yves Gunter noted that there appears to be a lack of awareness of the tools available for reducing time and costs in arbitral proceedings. Eric Schwartz shared his experience with regards to the limited availability of counsel as a cause for the stretched duration of arbitral proceedings.

Next panellist Patrick Baeten (Deputy General Counsel, Engie Group, Disputes) discussed how party autonomy applies in the context of EPP and highlighted questions that are yet to arise in practice, such as the possibility for the parties to expressly exclude EPP in their arbitration clause.

Professor Christophe Seraglini (Partner, Betto Seraglini, Paris) cautioned that while quick proceedings may be appealing, celerity must not override the requirement of quality work being performed by all participants in the arbitral process. He suggested that arbitrators should refrain from taking certain decisions as early as the case management conference (on whether to hold a hearing or to hear a witness or expert) when they could be better informed a later stage. He also cautioned that parties may feel a certain frustration if arbitrators attempt to hurry the process. At the same time, arbitrators should not become victims of the so-called ‘due process paranoia’, which poses a serious limit to arbitral tribunals’ efficiency efforts. Professor Seraglini advocated against having ‘habits’ or preconceived ideas on how to implement efficiency.

Panellists then turned to specific fast-track dispute resolutions systems. Bernard Hanotiau (Partner, Hanotiau & van den Berg, Brussels) shared his experience in sport arbitration, an area where proceedings are routinely conducted over a very short period of time. He described the structure of Court of Arbitration for Sports (‘CAS’) as well as the typical timeline of CAS proceedings. Simplified aspects of the procedure involve (i) reliance on a closed list of arbitrators, (ii) involvement of a CAS counsel in the administration of cases, and (iii) a default seat of arbitration (in Switzerland) and default applicable law (Swiss law) in the absence of an agreed choice. Antonio Rigozzi (Partner, Lévy Kaufmann-Kohler, Geneva) then explained the details of the CAS arbitral process and emphasized the very short time limits applicable to filing of a claim and the answer thereto.

Andrea Mondini (Partner, TIMES Attorneys, Zurich) went on to present the ‘Uniform domain name dispute resolution policy’ (‘UDRP’), which has allowed the speedy resolution of 40,000 disputes relating to domain names since its creation 18 years ago. The URDP is an online fast-track dispute resolution mechanism for disputes concerning the attribution of domain names. Such disputes are similar in kind, i.e. a trademark owner challenges the attribution of a certain domain name to the registrant. No direct agreement exists between the parties. The substantive principles applied are all included in the UDRP itself, which does not require application of national law. The procedure is conducted online by a panel of one or three members appointed from a list maintained by WIPO. The panel has 60 days to decide and the cost is minimal (a 1500 USD non-refundable fee). UDRP decisions are directly enforced by the domain name registrar, without any court intervention. Although the decisions are not res judicata, few disputes are subsequently referred to national courts, suggesting that the system is well accepted. According to Mr Mondini, this model should inspire other sectors giving rise to standard claims, where no contracts are formed between the parties to the dispute.

Constantine Partasides QC (Partner, Three Crowns LLP, London) followed with a presentation advocating in favour of the more frequent use of summary decisions in international arbitration. He ventured that the primary obstacle to the efficient disposition of disputes (of any size) in arbitration was the ’due process paranoia’. Noting that summary judgments exist for any disputes in state courts, he recalled their history in England, which traces back to the medieval courts of merchants, when the courts of ‘piepowder’ (pieds poudreux – dusty feet) became the alternative to common law courts until they, too, became excessively formalistic and declined. According to Mr Partasides, a similar pattern is likely to happen to arbitration. Summary decisions are, according to him, a useful tool to improve efficiency in appropriate cases. He encouraged practitioners to allow each arbitration to become ‘a microcosm for procedural reform’. 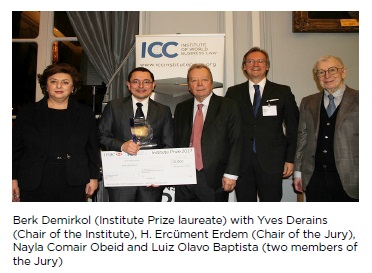 Dr Mohamed S Abdel Wahad (Founding Partner & Head of the International Arbitration, Zulficar & Partners, Cairo; Vice-President, ICC International Court of Arbitration) then discussed the enforcement of awards rendered in expedited proceedings. While noting the absence of any specific provision related to enforcement in the ICC Rules and the scarce case law on the issue, he concluded that there was no reason to fear that awards rendered in EPP cases would face specific challenges at the enforcement stage.

Co-Chair of the day along with Michael Polkinghorne, Laurent Lévy (Founding Partner, Lévy Kaufmann-Kohler, Geneva) concluded the discussions of the day, expressing his wish and forecast that the EEP will be successful.

The audience then moved to a cocktail reception during which the winner of the 2017 edition of the ICC Institute Prize was announced by Chair of the Jury, H. Ercüment Erdem and Chair of the Institute, Yves Derains: Berk Demirkol, for his thesis entitled: ‘Judicial Acts and Investment Treaty Arbitration’. 1