The annual ICC Mediation Week and the competition rounds were held at the ICC headquarters, amphitheatres and Parisian law firms hosting the event. Bringing together over 500 participants – professional mediators, academics and students – from around the world, this educational gathering is also viewed as highly inspiring by professionals. Alan Limbury, mediator and co-chair of the competition problems drafting group, shares his experience and insight of this prestigious and fun event. The next edition of the ICC Mediation Week is set to take place on 7-13 February 2019 in Paris (www.iccwbo.org/ICCMediationWeek).

The 2018 ICC Mediation Week began with an International Mediation roundtable, an exhilarating opportunity for mediators and academics from around the world interactively to address current issues and share their experiences in a challenging environment.

In one particularly interesting session Jawad Sarwana, a leading mediator from Pakistan, recounted how a mediation unfolded –keeping it anonymous, of course. He stopped at a critical moment in the narrative:

Mr Sarwana asked the audience what he should have done next, since he could see there was a deal to be done but neither party had agreed that he could share their information. Needless to say, there was a range of views expressed… None took seriously my jocular suggestion that the mediator should receive the large payment and dispense the small payment to the claimant!

On the next day, training sessions were held for competitors, judges and mediators in preparation for the 13th ICC International Commercial Mediation Competition, in which teams of university students, which must include at least one law student, seek to resolve a specially drafted problem and are scored by the judges on the extent to which they:

Skills shown to be successful include:

The first ICC Mediation Competition, in 2006, involved 10 teams of students. This year there were 65 teams from 32 countries, including Kenya, China, Indonesia and Japan, as well as American, European and Australasian countries. Counting students, coaches, professionals, academics, volunteers and organizers, there were over 550 participants. Numerous sponsors provided necessary funding, including for several cocktail parties and meals during the week.

Under the competition rules, developed over the course of the last 13 years by a working group of professionals, all mediation sessions are conducted under the ICC Mediation Rules. Mediators and judges are required to observe guidelines designed to bring about consistency in their approach, both in their roles and in the constructive feedback they give to students at the end of their mediation session.

This year’s problems (eight in total), drafted over many months by a working group of professionals and often based on real life disputes, consisted of general information, available to both sides, and confidential information for each side.

This year’s topics included unexpected cost increases for food for refugees supplied to a Non-Governmental Organization under a fixed price contract; competing motor racing teams with similar names and colours; termination of a building construction contract for alleged defects; finishing and paying for a long abandoned ‘Follywood’ movie; alleged wrongful termination of employment; competing drone delivery apps; alleged infringement and disputed ownership of a tea brewing machine patent (one issue being the possible omission of an Oxford comma); and in the Final round, malfunction of volcanic ash dispersal technology installed for coffee growers.

After four preliminary rounds, in which all teams addressed the first four problems, the best 16 teams advanced to the first of four knockout rounds, culminating in the Final, between the University of New South Wales, Australia (UNSW), and Saint Joseph University of Beirut, Lebanon, held before a large audience at a Parisian amphitheatre. 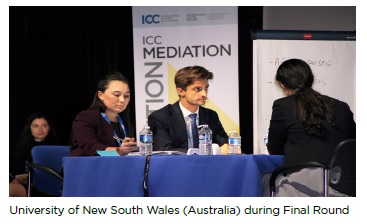 After the five judges retired to consider their verdict, the winning team was announced: UNSW, comprising Nanak Narulla and Brittany Young in the Final and Jack Rathie and Nadhirah Daud in the Semi-Final, coached by Dr. Rosemary Howell, who also coached the winning UNSW team in 2016. As Dr. Howell said in a Linked-In post:

I’m tempted to say winning was my best moment but really it wasn’t – although I will remember [it] all my life. The best moment was suddenly realizing that the repertoire I had worked so hard to instill had become the students’ own – they took off with it and used it so wisely, authentically and maturely. They had learned to be truly in the moment and I am so extraordinarily proud of them for that.

In another Linked-In post, Thomas P. Valenti, a well-known trainer in negotiation and mediation, said:

I am reluctant to declare one ‘best’ moment, as there are so many. If the goals are to learn, to meet new people and to have fun, some of these moments we get to see, others we hear about from others – the students, coaches, professionals, volunteers and organizers. Since this is primarily a marathon experiential learning experience, I think the best for me is when I learn that a participant takes a piece of appropriately given feedback, and applies it in a later round with success and the technique is recognized and confirmed by others later as positive. When we see this happen, we know we are achieving one of the goals of the competition. The other goals – to meet new people and to have fun are clearly seen in our daily participation and are more easily attained, but I will choose the learning as our ‘best’ moments.

Over its 13 years, the ICC competition has given rise to similar competitions around the world, all of which provide an opportunity for generational change within the legal profession, as the lawyers of tomorrow learn the dispute resolution techniques of today.