The ICC International Court of Arbitration co-organised along with the Institute for Transnational Arbitration (ITA) and the Institute for Energy Law (IEL) of the Centre for American and International Law the 5th edition of their joint conference on international arbitration in the energy sector. Juan Manuel Poggio Aguerre, Foreign Associate at King & Spalding in Houston, reports on the main takeaways of the event, the client’s perspective as presented by leading corporate in-house counsel, and insights from experts in the industry. Save the date for next year’s joint conference on 24-25 January 2019 in Houston
(https://iccwbo.org/event/6th-ita-iel-icc-joint-conference-international-energy-arbitration/). 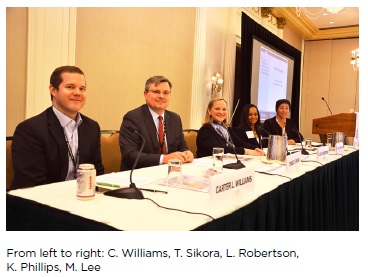 Senior in-house counsel from major energy companies addressed key issues which should be considered when negotiating and drafting an arbitration agreement.

The panel began by addressing the seat of the arbitration. Because of its potential to effect on the enforceability of an arbitration award, the neutrality of the seat of the arbitration was regarded as the main item to negotiate. While panellists favored venues such as New York, London, and Singapore, they observed that parties could compromise, if needed, by choosing any jurisdiction that is a signatory to the New York Convention and whose courts do not interfere unnecessarily with the arbitral proceedings or the ensuing award.

The panel considered the issue of governing law as being of secondary importance to the choice of seat of the arbitration. Panellists agreed that most of the time, arbitrators would tend to decide a case on the basis of fairness considerations and legal principles shared by most legal systems.

The panel also discussed a number of issues to be considered when opting for arbitration. Stabilisation and dispute resolution clauses were considered basic requirements for any long-term investment. Well-drafted escalation clauses, for instance, allow contracting parties to efficiently increase the overall possibility of settlements when a dispute arises. They typically entail certain ‘steps’ to be undertaken by the disputing parties before arbitration is initiated (e.g. by requiring that the dispute be first referred to the parties’ management, or to mediation). Compliance with these steps allows the parties to become aware of their legal claims’ strengths and weaknesses, reducing the asymmetry of information between them and facilitating the settlement of their dispute.

Special mention was finally given to the language of the arbitration proceedings, as translation costs could become substantial.

The panellists favored candidates with extensive experience within the relevant industry. An arbitrator’s availability, organizational skills, persuasiveness with other tribunal members, and diversity were also considered to be important. The panelists also suggested that sometimes an appointing party may wish to prioritise candidates with good management skills, over a highly experienced arbitrator in the subject matter of the dispute. The influence that an arbitrator would have on the tribunal was also addressed. While senior arbitrators may have influence based on their experience, more junior arbitrators may have sway by being proactive and knowing the case in detail.

The arbitrator’s approach to matters of contract interpretation (i.e. adopting a literal or purposive view) was another common consideration in deciding who should be an arbitrator. In that regard, the opposing party’s selection would also be a factor worth considering. For example, by knowing the Claimant’s appointee in advance, the Respondent can typically tailor its appointee accordingly.

The panel also stressed the importance of protecting the integrity of the appointment process. Because arbitration rules generally allow for ex parte discussions between parties and prospective arbitrators to check for matters of experience and availability,3 among other issues, the panel suggested documenting the appointing process to protect against accusations of misconduct. This can be done by informing the candidate in advance of the exact items to be discussed during an interview.

Following questions from the audience, the panel discussed criticism of the party-appointment method, and how it can create perverse incentives for arbitrators. Yet, the panelists referred to a recent survey indicating that 66% of the parties prefer to maintain the system of party-appointments.4 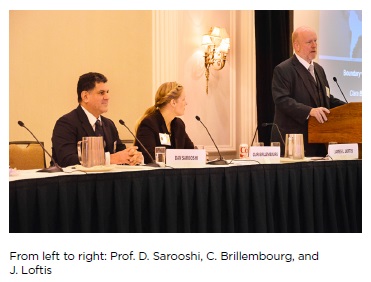 The panel first summarised the principles of line-drawing to establish boundary delimitation as stated by the International Court of Justice (‘ICJ’) in Romania v. Ukraine (2009). In that case, the ICJ declared that, as in maritime delimitation law, a three-step approach governs the matter, requiring the tribunal to: (i) establish a provisional equidistance line; (ii) make readjustments based on ‘special circumstances’, if needed; and, (iii) compare the ratio of costal lengths with that of relevant maritime areas to see whether there are inequitable results.

The panel focused especially on the second step and the consideration of ‘special circumstances’. The panel commented on the ICJ’s case law regarding whether oil and gas concessions in disputed areas can be considered as a special circumstance in delimitation disputes, since such concessions may eventually reflect a consensus by the disputing parties regarding their boundaries. In Tunisia v. Libya (1978) and Libya v. Malta (1982), the ICJ found the grant of oil and gas concessions to be a relevant factor. Thereafter, however, the ICJ has consistently decided otherwise, asserting the parties’ conduct regarding the exploitation of energy resources is not a factor to be considered as a special circumstance. The panel referred in this regard to Cameroon v. Nigeria (1994), Barbados v. Trinidad (2006), and Guyana v. Suriname (2007).

This issue was recently revisited in Ghana v. Ivory Coast (2017) by the International Tribunal for the Law of the Sea (‘ITLOS’). Perhaps this is the most important case on the matter, as it combines the jurisprudence of both the ICJ and ITLOS, making it a highly authoritative opinion. Additionally, it is the first case on the matter where provisional measures were granted.

The dispute involved Ghana extracting minerals from an area disputed by the Ivory Coast. The Tribunal, in following precedent, stressed that the extracting activities, however consistent, do not manifest tacit agreement between the States. The Tribunal also found in granting the provisional measure that, while no new drilling could occur pending determination of the dispute, existing activities could nonetheless continue.

The Tribunal decided that its decision bore constitutive rather than declarative effect. In consequence, activities performed in a disputed area before a judgment was issued are deemed to be lawful under international customary law. However, claims of ownership by the State extracting resources need to be made in good faith, which in this context means that the State must undertake to negotiate boundaries in good faith and in a meaningful manner. It also means that the State must refrain from jeopardizing or hampering the reaching of a final agreement with the other party.

The panel finally commented that the Tribunal avoided declaring what sort of activities can be carried out in disputed areas, but that Judge Paik’s separate opinion addressed this issue, suggesting that activities causing a permanent physical change to the continental shelf may be seen as a breach of international customary law.

‘Resource Nationalism’ is the term often used to discuss the burdens imposed ex post by sovereigns upon resource companies.

This term may sometimes be regarded as unfair because of its associations with illegitimate actions taken by sovereigns. It is over-simplistic, as it fails to address the cause of the problems confronted by a State while taking actions of the sort. Rather than merely focusing on the consequences to investors, the question to be asked is whether a given situation has become so economically untenable for a State, calling for corrective actions over past arrangements. ‘Resource Nationalism’ is frequently identified with emerging market jurisdictions, but it has been exercised by industrialised nations alike. Australia recently decided to restrict the export of gas, responding to its increasing domestic demand. While large sectors of Australia’s population were suffering prohibitive energy prices, most of Australia’s gas suppliers were reporting billions in revenue. Yet, all other factors being the same, "Resource Nationalism" is not claimed to characterise such measure, perhaps because Australia is a developed country.

‘Resource Nationalism’ can also be regarded, from a different viewpoint, as an example of a sovereign’s opportunistic behaviour, referring to cases in which a State seeks to claw back revenue from an already sunk investment, rather than abiding by what it bargained for ex ante. During the boom of oil prices 15 years ago, oil-producing States implemented mechanisms to increase their initial stake in the project, at times imposing undue financial burdens on investors, typically in the form of ‘windfall taxes’.

A closer examination of stabilisation clauses, taxes, and the fair and equitable treatment (‘FET’) standard provisions seems pertinent in this context, as these issues have been dealt in a rather inconsistent, even contradictory manner by arbitral tribunals. Three cases involving Ecuador shed light upon this inconsistent practice. At a time when oil prices were high, Ecuador passed regulations under the guise of ‘participations’, imposing additional financial burdens amounting to 50% (subsequently raised up to 99%) of the resulting revenue when the price per barrel exceeded the US$ 30 threshold. The relevant contracts arguably contained tax stabilisation clauses.

Despite their different reasoning, all three tribunals found that a 50% tax on the resulting revenue did not amount to a violation of the FET standard, but that a 99% tax on same did amount to a violation of an investment treaty. As a takeaway lesson from these cases, in finding a treaty violation, tribunals will likely assess (i) whether the BIT includes a carve-out provision for tax measures; (ii) the scope of any contractual stabilisation clauses; and (iii) the percentage of taxes the investor is burdened with.

The panel suggested the inclusion of stabilisation clauses in their contracts, the so-called ‘Tax-Paid Clause’ being the most appealing: such a provision allocates the risks of new or increased taxes on the national oil company, which automatically assumes any financial burden and, unlike other clauses, it has the advantage of avoiding interpretation problems.

Laurence Shore (Partner, BonelliErede, Milan) reported on a selection of rulings that will likely have an impact on energy arbitration.

The first ruling mentioned was an investment case resolved without an award. In Transcanada Corp,8 involving a violation of NAFTA and a $15 billion claim, the Obama administration was accused of preventing the Claimant from applying for the Keystone Pipeline Project by means of unnecessary delays. Under the Trump administration, the Claimant was then invited to apply to the Project, provided that it committed to employ only American-made steel. According to the reporter, the threat of continuing with the proceedings made the US eliminate that condition, hence discontinuing the dispute.

In Venezuela Holdings,9 involving ICSID annulment proceedings, the committee annulled part of the award relating to compensation for expropriation. The arbitral tribunal assumed a conflict between international law and municipal law, requiring the former to preempt the latter. In so doing, the arbitral tribunal was said to have exceeded its powers, since it ignored that the applicable BIT required application of the national law. The reporter suggested that the Committee, in reasoning its decision, had included little legal authority, even though it could have cited Judge Morelli’s separate opinion in Barcelona Traction.10

In Jürgen Wirtgen,11 on the basis of the Germany-Czech Republic BIT, Claimants argued that the Czech Republic had violated investors’ legitimate expectations, since the State imposed taxes on the electricity output of solar power plants. While this Tribunal did not find a violation of the Treaty, six other similar cases against the Czech Republic await resolution.

In IPCO Limited12, Claimant moved for ex parte enforcement of an award in the United Kingdom, which was then stayed due to a challenge to the award. Because of delays in the resolution of the challenge, the enforcing Court requested the Respondent to post security in subsequent opportunities to retain its resistance to enforcement. The UK Supreme Court subsequently ruled that neither the English Arbitration Act nor the New York Convention require the posting of security to stay an enforcement proceeding.

The speaker finally mentioned three cases of the Supreme Court of Texas which will likely have an effect on the industry’s conduct.