On 15 February 2018, the International Institute for Conflict Prevention and Resolution (CPR), an independent non-profit New York based organization, awarded to Mirèze Philippe, Special Counsel at the ICC International Court of Arbitration and founding co-president of ArbitralWomen, and Lucy Greenwood, international arbitrator, the CPR’s 2018 Awards for Outstanding Contributions to Diversity in ADR.

Created 10 years ago, the CPR Diversity Award recognises the work of practitioners who have undertaken initiatives towards change and towards achieving equality for all dispute resolution practitioners.

The Award acknowledges Ms Philippe’s dedicated efforts to bring diversity to the foreground that date back over two decades to an era when debate and awareness around such issues was not commonplace.

On receiving the Award in Atlanta on International Women’s Day, Mirèze expressed gratitude to the reputed dispute resolution practitioners who have nominated her, to the selecting committee, and to her ArbitralWomen and ICC colleagues.

Receiving the prestigious CPR Diversity Award is one of the highlights of my professional life. I am honoured and humbled by the recognition of my peers from the dispute resolution community. (...)

I dedicate this Award to all those who strive for justice and equality and who may never receive any recognition. Diversity and inclusiveness are human rights issues and so is equal access to justice for which I also militate by promoting access to justice online. (…)

The CPR Diversity Award means a great deal for me and I consider it to be a triple honour. First, it is the only diversity award; CPR’s innovations are inspiring and will hopefully continue improving the support we all owe to under-represented groups among whom much talent may be wasted if we do not act and react. Second, I find it remarkable to be the sixth person who deserved this prestigious Award together with Lucy Greenwood. Third, even though I have invested time, energy and efforts in the last 25 years to promote women in dispute resolution, I never thought I would be rewarded for this. (…)

I share this Award with my husband for his endless support. I also share it with Louise Barrington, who was the third recipient of this Award, and with whom I founded and built ArbitralWomen (‘AW’) brick by brick; we are delighted that AW contributed to raising awareness about the role of women in dispute resolution, and contributed to change. I also thank all my colleagues from AW, my very dear colleagues from ICC, and many other colleagues and friends from the dispute resolution community. (…)

Looking back at the changes that occurred over the last 25 years at ICC, I wish to pay tribute to those who made efforts towards change, namely Sigvard Jarvin, then General Counsel, Benjamin Davis, then Counsel and Eric Schwartz, Secretary General at that time. Jarvin encouraged female colleagues to get more involved in arbitration, Davis has relentlessly pleaded in favour of promoting female colleagues to higher positions, and change started with Schwartz who promoted a female deputy counsel to counsel. In the recent years the management of the Court has been very supportive to women which is demonstrated by our statistics and the number of female Court members.

Congratulating Mirèze on her achievement, Alexis Mourre, President of the ICC Court said that ‘Mirèze’s personal conviction and tireless determination has been a driving force behind ICC’s strategic efforts to enhance the arbitration process through enhanced gender and cultural diversity.’

ICC Court Secretary General Alexander G. Fessas insisted on her ‘perseverance, selflessness’ and ‘huge amount of work’, and how she succeeded ‘not only in raising awareness of the diversity debate, but also in helping to address some of the challenges arising from it’. He congratulated Mirèze for her ‘significant contribution to narrow gender, generational and geographical gaps in our global community’.

Mirèze has for many years stressed the importance of gathering and disseminating gender data. Such transparency has raised awareness on gender disparity. Thanks to Mirèze, and the dedication of many practitioners, diversity is now centre stage in domestic and international dispute resolution.1 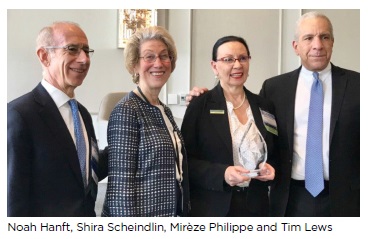 1
Press-releases were published on 15 February 2018 by CPR and by ICC (https://iccwbo.org/media-wall/news-speeches/icc-special-counsel-named-recipient-prestigious-diversity-award/). A full report is published in ArbitralWomen Newsletter issue 25.