The 5th ICC Asia Conference celebrates ICC’s centenary and 11 years of its presence in Asia. Lexi Menish, Senior Associate at Freshfields Bruckhaus Deringer in Singapore, reports on this year’s conference which covered a range of topics, including key arbitration developments in the region, the future of multilateral institutions and dispute resolution in light of geopolitical tensions, the problem of due process paranoia, the Singapore Convention on Mediation and data privacy regulations. The 6th ICC Asia Conference will take place in Hong Kong on 24 June 2020 (www.iccwbo.org/ICCASIA).

Arbitration developments in the region

Andi Kadir (Partner, HHP Law Firm, Indonesia) addressed the 2016 establishment of the so-called ‘new BANI’ Arbitration Centre - formed by some senior Indonesian arbitration practitioners, purportedly as the ‘transformation of the original BANI,’ which was established in 1977 and continues to operate – and the challenges that this ‘BANI duality’ has created for arbitration in Indonesia.1 Those challenges include: (i) confusion as to which BANI should administer an arbitration under a BANI arbitration clause; (ii) parallel proceedings before both BANIs, sometimes resulting in conflicting awards; and (iii) enforcement issues as the courts continue to grapple with the question of which is the ‘legitimate’ BANI.

Pui-Ki Ta (Counsel, ICC Court of Arbitration, Hong Kong) discussed recent pro-arbitration developments in Hong Kong, including: (i) the legalisation of third-party funding; (ii) arbitrability of intellectual property issues; and (iii) the April 2019 agreement between Hong Kong and the PRC on the enforcement of interim measures.

Masako Takahata (General Counsel, Eurus Energy Holdings Corporation, Japan) described recent efforts by the government to promote Japan as an arbitral seat, including pending amendments to Japan’s arbitration and foreign lawyers legislation, the establishment of the Japan International Dispute Resolution Center in Osaka (2018) and Tokyo (2019), and various private sector initiatives. These include the Japan Business Federation’s lobbying efforts for more investment treaties, and the establishment of an international arbitration committee within the Japan In-house Lawyers Association, which provides education and training for in-house counsel regarding arbitration.

Finally, Louie Ogsimer (Chair, Arbitration, Co-Chair, Litigation, Romulo Mabanta Buenaventura Sayoc & de los Angeles, Philippines; Alternate Member of the ICC Court) discussed the problem of parallel proceedings at the intersection of treaty and contract disputes, and queried whether a potential solution might be an ICC (or other institutional) rule allowing consolidation in those circumstances.

Following Alexander Fessas’ (Secretary General, ICC International Court of Arbitration; Director, ICC Dispute Resolution Services, Paris) welcoming address, K Shanmugam SC (Minister for Home Affairs and Minister for Law, Singapore) delivered the keynote address. He discussed the fundamental mission behind the establishment of ICC – peace through trade – and how that mission is being challenged today by protectionism and attacks on multilateral trade and investment frameworks. He set out three pillars underlying Singapore’s critical role in preserving that mission: (i) law follows business: the centre of gravity of global business is shifting to Asia, and Singapore is a gateway; (ii) Singapore is a hub for international dispute resolution, as the third most preferred arbitral seat in the world and the most preferred in Asia;2 and (iii) the opening of Maxwell Chambers Suites3 underscores the flourishing partnership between Singapore and ICC. 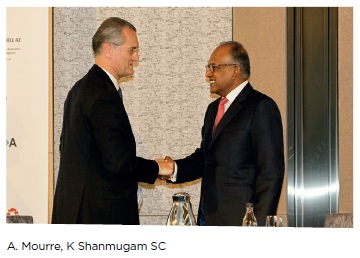 The speech was followed by a discussion between Mr Shanmugam and Lawrence Boo (Head of Chambers, The Arbitration Chambers, Singapore; Member of the ICC Court), chaired by Alexis Mourre (President, ICC International Court of Arbitration, Paris). They discussed Singapore’s role and future in light of a ‘besieged’ WTO, declining foreign direct investment, receding global trade volumes and China’s BRI, concluding that these developments presented opportunities for, and ultimately could benefit, Singapore and Southeast Asia. These developments likely also will lead to greater demand for dispute resolution services, providing a role for both ICC and Singapore as leaders in international arbitration.

Alexis Mourre’s keynote address emphasised ICC’s increasingly Asian focus, including recent initiatives like (i) opening an ICC office in Shanghai; (ii) engaging with corporates, state-owned enterprises and governments with regard to the resolution of disputes arising out of Belt and Road projects;4 and (iii) holding ICC Court plenary sessions annually in Singapore and Hong Kong. Mr Mourre also discussed recent ICC innovations, including the Expedited Procedure Provisions under the 2017 Arbitration Rules which have resulted in greater efficiency (at least 25 awards have been rendered within six months), new guidance on disclosure and conflict of interest, and better transparency through the publication (on an opt-out basis) of ICC Court decisions and awards.

Mr Mourre announced the establishment of the ICC Singapore Arbitration Group which aims to (i) represent the Singapore business community in support of the work of the ICC Commission on Arbitration and Amicable Dispute Resolution Services (ADR); (ii) promote ICC arbitration and other Dispute Resolution Services in the region; and (iii) expand the expertise of the regional community involved in dispute resolution through capacity building activities.5 Singapore is the 6th preferred arbitration seat in ICC Arbitration and the most preferred seat in Asia. In 2018, Singapore was also ranked 11th in the list of number of arbitrators by nationality, with 35 Singaporean arbitrators having been confirmed or appointed to ICC arbitral tribunals.6 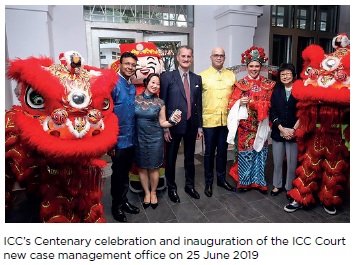 The geopolitics of law

Kishore Mahbubani (Senior Advisor, University & Global Relations; Professor in the Practice of Public Policy, National University of Singapore) addressed the role that lawyers can and should play in preserving the rules-based system of the post-1945 liberal international order. That system has brought unprecedented peace and prosperity, but today, amidst a backlash against globalisation, countries like the US who once championed this order are turning their backs on it. At this time of geopolitical tension, it is more important than ever to strengthen and defend multilateral institutions and the liberal rules-based order. Lawyers have a role to play in explaining to the world why we need this order, and not anarchy, if we are to continue to enjoy the peace and prosperity it ushered in.

In a discussion co-chaired by Jelita Pandjaitan (Partner, Linklaters, Singapore) and Byung-Chol Yoon (Attorney, Kim & Chang, South Korea; Member of the ICC Court), panelists considered the implications of the US-China trade war for the region and for international arbitration. Mr Yoon and Nguyen Manh Dzung (Director, ADR Vietnam Chambers LLC, Vietnam; Member of the ICC Court) observed that South Korea and Vietnam were caught in the cross-fires of the US-China dispute, and each country had to navigate its position between the two superpowers carefully. Kishore Mahbubani questioned whether a dominant China would adhere to the rules-based system and stressed the importance of strengthening global institutions. Brenda Horrigan (Head of International Arbitration, Herbert Smith Freehills, Australia) observed that states are moving away from investor-state dispute settlement (‘ISDS’) mechanisms due to misguided perceptions of bias against states and the perception that ISDS bypasses national legal systems and restricts states’ ability to regulate.

‘From our Perspective’: Demystifying the workings of the Tribunal and the State Court

Loretta Malintoppi (Independent Arbitrator, 39 Essex Chambers, Singapore; Council Member, ICC Institute of World Business Law) led a panel discussion on "due process paranoia", asking whether it was warranted and how due process abuses could be curtailed.

On the first issue, V K Rajah SC (International Arbitrator, Essex Court Chambers Duxton, Singapore Group Practice) suggested that such paranoia was overblown, noting that judges globally are increasingly familiar with arbitration and arbitral case management, and that awards were rarely annulled on natural justice grounds (i.e., the rule against bias and right to a fair hearing) in key Asian jurisdictions (Hong Kong, Singapore and Australia). Salim Moollan QC (Essex Court Chambers, United Kingdom) confirmed that the position was similar in the United Kingdom. Anselmo Reyes (International Judge, Singapore International Commercial Court) proposed that in jurisdictions where courts are less familiar with international arbitration, like Vietnam, due process concerns are more warranted, but eventually could be remedied by improving judicial judicial familiarity with and knowledge about arbitration. From the Chinese perspective, Helen Shi (Partner, Fangda Partners, China; Alternate Member of the ICC Court) noted that Chinese courts are generally reluctant to annul or refuse enforcement on due process grounds, but parties should still beware: Chinese courts can intervene during an arbitration to rule on the validity of the arbitration agreement, and if the arbitral tribunal continues with the proceedings in the meantime, there may be a risk of non-enforcement.

Hazel Tang (Counsel, ICC International Court of Arbitration, Singapore) explained that due process paranoia created unnecessary inefficiency, and that paranoia was highest in the context of non-participating parties – where the risk that a party would be deemed not to have had an opportunity to present its case is greater.

Ms Malintoppi queried whether and how the abuse of due process to derail proceedings could be prevented by arbitrators, judges and/or institutions. The panelists debated whether arbitrators should sanction or otherwise take parties to task for bad behavior, during proceedings or in the award: it could curtail bad behavior, but could also introduce an unacceptable sense of animosity between arbitrators and parties, and could even lead to non-enforcement risk. All agreed, however, that arbitrators could afford to be more robust in case management and should not feel hamstrung by due process paranoia.

Oxford style debate: ‘This house believes that the Singapore Convention will change the current landscape of dispute resolution for the better’

Smitha Menon (Partner, WongPartnership LLP, Singapore; Member of the ICC Court) and Marion Smith QC (39 Essex Chambers, United Kingdom) were pitted against James Morrison (Principal, Morrison Law, Australia) and Adrian Tan (Partner, Litigation and Dispute Resolution, TSMP Law Corporation, Singapore) in a lively debate over the impact of the Singapore Convention on Mediation on the dispute resolution landscape. Ms Menon and Ms Smith argued in support of the motion that the Singapore Convention plugs an enforcement gap and provides incentive to mediate in cases where the perception of unenforceability is a deterrent to mediation. Mr Morrison and Mr Tan countered that mediated settlement agreements are almost universally enforced and that the real issue is encouraging parties to mediate in the first place, which the Singapore Convention may actually discourage by detracting from mediation’s flexibility and imposing grounds for refusing to grant relief that might scare parties away (particularly ‘mediator misconduct’ under Article 5). 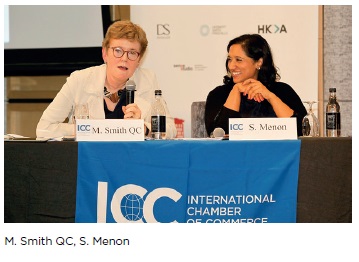 A jury comprised of Sapna Jhangiani (Partner, Clyde & Co Clasis Singapore Pte Ltd., Singapore), Alexander Fessas and Benjamin Hughes (Arbitrator, The Arbitration Chambers, Singapore) asked the debaters a series of questions. Through a live poll, 64% of the audience voted for the opposing perpective. 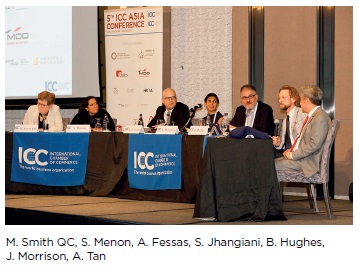 That evening, Kathleen Paisley (Partner, AMBOS Law, Belgium/United Kingdom; Co-Chair, ICCA-IBA Joint Task Force on Data Protection in Arbitration Proceedings) and Alexander Fessas led a roundtable discussion on the implications of the General Data Protection Regulation (‘GDPR’) and similar data privacy regulations for international arbitration practitioners. Although the GDPR and similar legislation were designed without international arbitration in mind, they nonetheless apply to arbitration practitioners: in the course of an arbitration, parties, counsel and arbitrators will at various points be controllers and processors of personal data. Ms Paisley explained that data privacy rights are not absolute, and the key to compliance will be balancing the rights of the data subject(s) against the ‘legitimate interests’ at play in the arbitration, minimizing the use and transfer of personal data to only that which is truly relevant, and keeping a careful record of data protection measures and the specific decisions taken with respect to personal data throughout the proceedings. She cautioned against relying on the data subject’s consent as the basis for processing data as that consent can be withdrawn at any time, and if obtained by a party from its employee may not be deemed valid in the first place. The ICCA-IBA Joint Task Force on Data Protection in Arbitration Proceedings is considering guidelines to help arbitrators, counsel and parties navigate these regulations as they apply to international arbitration.

5
See https://www.straitstimes.com/singapore/group-set-up-to-raise-singapores-profile-as-international-hub-for-dispute-resolution. Individuals interested to find out more about the ICC Singapore Arbitration Group are encouraged to contact ICC Singapore at iccsingapore@sbf.org.sg.