Schedule of Conciliation and Arbitration Costs

Each party to a dispute submitted to the ICC for conciliation and arbitration shall be liable for a registration fee of US S 50 and no application will be entertained unless accompanied by this deposit.

The registration fee shall also be payable by each party if the ICC is called upon to appoint an arbitrator or arbitrators outside the procedure of its Court of Arbitration.

The registration fee is not recoverable and becomes the property of the ICC.

Before a case is considered by the Conciliation Committee, each party shall contribute to the cost of the conciliation procedure by paying half the costs to be calculated in accordance with the table of administrative charges hereinafter set out.

Where the sum in dispute in any such case is not stated, the Secretariat shall fix the costs.

c) The Court shall fix the fee of the arbitrator(s) in accordance with the table hereinafter set out or, where the sum in dispute is not stated, at its discretion.

d) When a case is submitted to more than one arbitrator, the Court, at its discretion, shall have the right to increase the fee up to a maximum of three times the fee payable to one arbitrator.

f) Before any expertise can be commenced, the parties, or one of them, shall pay a deposit sufficient to cover the expected fee and expenses as determined by the arbitrator(s).

g) If a case, not preceded by attempted conciliation, is withdrawn before it reaches the arbitrator(s), any deposit made shall be returned to the parties, after deduction of a sum equal to half the administrative charge.

4. Scale of administrative charge and fees

To calculate the administrative charge and the fee the percentages applied to each successive slice of the sum in dispute are to be added together. 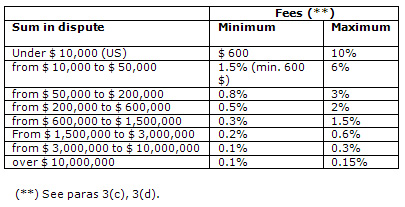