In the late 1990s, trade finance conferences in several contexts started to feature presentations of online systems that would revolutionize or even replace the letter of credit as the preferred trade finance solution. Fifteen years or so later, there has been no great revolution in the L/C market, but there has been an evolution in back-office solutions to improve the speed and accuracy of L/C management. 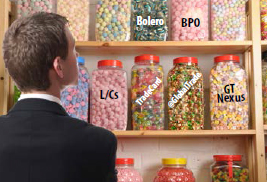 The L/C alternative has yet to emerge as a substantial threat to the traditional modus operandi, but there are serious players out there, often focused on multi-bank products or services that aim to substantially improve the operating environment for trade finance. New technologies are continuing to change the shape of the online L/C market, while other technological advances are beginning to support L/C provision for the paper-based documentary credit, which still seems to have a long life ahead of it.

Yet perhaps the biggest impact of the electronic world on the L/C is only just emerging in the shape of the Bank Payment Obligation (BPO), which as André Casterman said in the summer 2013 issue of DCInsight, will definitely cannibalize some of banks' L/C revenues. This latest type of trade finance transaction is not expected to eliminate or replace L/Cs, but it could be a game changer in the share different instruments have in the trade finance market.

Software developer and application service provider GlobalTrade Corporation (GTC) continues to convince corporates of the merits of its @GlobalTrade Multi-bank Trade Finance Platform. The company says it helps buyers, sellers, traders and financial institutions communicate faster and more efficiently while reducing risk and improving monitoring and control. The Canadian company recognizes that it is not selling into a homogenous market and targets both business enterprises and banks.

In March, it announced that FLSmidth, a leading supplier of equipment and services to the global cement and minerals industries, had selected GTC's trade finance platform to manage issued and received export L/Cs and bank guarantees. The Danish firm employs over 15,000 worldwide in offices in more than 50 countries and had revenue of EUR 3.338bn in 2012, of which 99 per cent was from business outside of Denmark.

While multi-bank solution providers such as GTC appear to be evolving, one of the most vocal proponents of an online L/C alternative, TradeCard, has so far made real inroads only in the apparel industry supply chain since its establishment in 1999.

In January 2013, it announced it would merge with global logistics-focused GT Nexus, a cloud-based supply chain execution provider. TradeCard also employs a cloud-based platform, but one focused on sourcing and order visibility. This has persuaded some analysts that the merger could be significant in terms of global trade management and supply chain multi-enterprise application markets.

Both providers had been seen as having a too-limited focus on cloud-based supply chain visibility and collaboration platforms, concentrating on too few specific transactions and processes.

This has been a stumbling block for both L/C alternative providers as well as providers of online solutions that seek to support traditional documentary credit processes. Essentially, enterprises, financial institutions, as well as shipping and logistics providers, were being asked to employ multiple platforms to meet their requirements.

The TradeCard-GT Nexus merger responds to this problem and seeks to meet the demand for broader and more compatible solutions. The merged companies' combined platforms provide customers using both TradeCard's and GT Nexus' platforms the opportunity to form a relationship with just one vendor.

Cross-process synergies could also be achievable, which appears to be a basis of GT Nexus's strategic thinking, given its recent partnership with Kinaxis. In April 2012, GT Nexus and Kinaxis announced a strategic partnership to deliver what they described as a cloud-based unified planning and execution platform. Kinaxis would provide a full spectrum of supply chain-related business processes, including supply and capacity planning, demand management, supplier collaboration and business processes outsourcing service providers.

Analysts say that both TradeCard and GT Nexus need to develop additional capabilities, even as the merged entity could result in increased market presence. GT Nexus customers include Xerox, Williams-Sonoma, Nestlé, DHL, Sears, Caterpillar, Kraft Foods and The Home Depot. TradeCard's customers include retailers and brands, among them Levi Strauss & Columbia Sportswear, Guess and Rite Aid.

Despite the synergies, the merged companies still face challenges. One supply chain and logistics analyst told DCInsight that chief amongst these is that the merged company will need to develop its technology and legal infrastructure to provide the risk mitigation and compliance required to assure major corporates and financial institutions.

The company clearly has a long way to go. Its claim to manage over US$100 billion in goods may sound impressive but, according to the World Trade Organisation, the dollar value of world merchandise exports in 2012 was US$18.3 trillion.

The Bolero web-based trade finance solution continues to work on automating the lifecycle of documentary credits, standby L/Cs, guarantees, bonds and other traditional trade instruments for both importers and exporters.

Bolero sells itself as a multi-bank platform and claims that a fast-growing number of corporates are now utilizing the Bolero service in collaboration with their partner financial institutions. But bankers canvassed by DCInsight suggested it still faces big challenges.

One banker said that one of these centres on the difficulty of any organization being able to enforce the standardization of trade called for in Bolero's systems. He said there are so many parties involved in international trade that it's difficult to see how they would all be brought in line to work on a single or even on compatible systems. The actors go beyond the parties named in the documents, such as buyers, sellers, shippers and insurers, and include, for example, customs officers who may still require paper-based documents.

In this context, whilst it seems to make sense to work towards multi-bank platforms, it seems that paper-based L/Cs are here to stay, at least for the foreseeable future. But even in this context, there are technologies that could be employed to digitize the documents and provide advantages in terms of processing speed.

One of these is Optical Character Recognition (OCR) technology that scans text so that it becomes machine-readable. Scanned images and data can be sent to low-cost, possibly outsourced, document processing centres. Technologies are increasingly available to recognize and read images and data, and only when documents are unreadable or discrepant would they be plucked out of an otherwise automated system for manual processing.

As other electronic trade finance instruments, it's dependent on online interfaces with other actors and processes in a transaction, and appears incompatible with aspects of a transaction that remain paper-based. In that context, Bolero argues that key to real world usage of the BPO is adoption of an electronic bill of lading (eBL) solution in transactions where a paper version of this piece of trade documentation is used.

Without dematerializing the bill of lading, Bolero argues that the full benefits of the BPO may never be realized, and this is particularly the case when the bill of lading triggers BPO settlement. But the eBL itself relies on other actors being able to interface with it, and markets where customs clearance remains paper-based are out of bounds for both eBL and BPO.

Nevertheless, in major trade corridors, a potential shift from the physical flow of documents to an electronic flow of data seems a distinct possibility, at least from a technical perspective. But the most critical determinant of the BPO's success is not a technical one, but the extent to which it attracts and is adopted by corporate customers. Success, then, may depend on banks' motivation and determination to sell it. They should be motivated to sell to customers using open account, as the BPO seems to provide more revenue-generating opportunities for those customers shifting from L/Cs towards open account. These could be steered to the BPO. Also, the BPO provides banks with a product that competes with non-bank risk-mitigation providers in the open account market, notably credit insurers.

In sum, with some serious marketing efforts by banks, the BPO could take market share from L/C and open account clients, and when the rate of adoption by corporates starts to become significant, some real signs should emerge to indicate how much of a game changer this new instrument is likely to be.