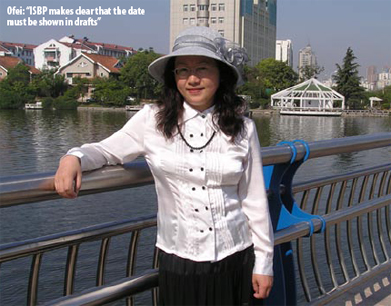 In DOCDEX Decision No. 260, the L/C was available with any bank by negotiation at sight. The Initiator (negotiating bank) negotiated documents presented under the L/C and sought reimbursement at sight, as the documents were found to be in compliance with the terms and conditions of the L/C. The Respondent refused to take up the documents, stating that one of the discrepancies was "Draft not dated". The Panel of Experts' analysis cited paragraph 13 of ISBP 645 (dealing with UCP 500) to read: "Drafts, transport documents and insurance documents must be dated even if a credit does not expressly so require." But it then concluded that: "In our view, the date of a draft is only required in specific circumstances for determining the maturity date of the draft, e.g., if drawn 'at sixty days date' ... This would never be the case for a draft drawn 'at sight' [emphasis added]." In my view, this Decision misunderstands the role of the date of issue for drafts. Moreover, it conflicts with ISBP 645 paragraph 13 as well as with ISBP 681 paragraph 13.

A bill of exchange is not only a means of payment, but also means of finance in both domestic and foreign financial markets. Therefore, many countries set up their own instruments act to standardize the use of drafts, promissory notes and cheques. Among these, the Bill of Exchange Act, 1882 and Convention Providing a Uniform Law For Bills of Exchange and Promissory Notes (Geneva 1930, abbreviated hereafter as the Geneva Convention 1930) are the most important, since they influence other countries' laws or acts.

Consider first the Geneva Convention 1930. Article 1 stipulates that a bill of exchange contains "A statement of the date and of the place where the bill is issued". Article 2 further emphasizes that "An instrument in which any of the requirements mentioned in the preceding Article is wanting is invalid as a bill of exchange, except in the cases specified in the following paragraphs ... ." The exceptions do not include the date of issue.

Obviously, the date of issue is mandatory to constitute a valid draft.

The Bill of Exchange Act, 1882 has no similar provision; however, it does have a requirement in this respect. Paragraph 3(4) ("Bill of exchange defined") of Part II stipulates that a bill of exchange is not invalid if it is not dated. This is a different position from that in the Geneva Convention. But article 12 ("Omission of date in bill payable after date") stipulates: "Where a bill expressed to be payable at a fixed period after date is issued undated, or where the acceptance of a bill payable at a fixed period after sight is undated, any holder may insert therein the true date of issue or acceptance, and the bill shall be payable accordingly."

In this Act, then, the date of issue is not mandatory, but any holder may insert the date of issue or acceptance if the draft is not dated. This position is different from DOCDEX Decision No. 260, which states that a draft need not be dated.

The Negotiable Instruments Law of The People's Republic of China (2004 revision) is similar to the Geneva Convention 1930. Article 22 of this law states that a draft shall bear a number of items, one of which is the date of the draft. It also indicates that a draft lacking any one of the items listed is invalid.

The fact that some Acts state that the date of issue in a bill of exchange is mandatory, while others do not, inevitably leads to disputes in practice.

Role of date of issue

In fact, the importance of the date of issue is that it can decide the deadline for presentment for acceptance or payment, which is key to a bill of exchange. This is reflected in articles 23 1 and 34 2 of the Geneva Convention 1930.

Paragraph 45 ("Rules as to presentment for payment") of the Bill of Exchange Act, 1882 states: "Subject to the provisions of this Act, a bill must be duly presented for payment. If it be not so presented the drawer and indorsers shall be discharged." Its sub-clause (2) states: "Where the bill is payable on demand, then, subject to the provisions of this Act, presentment must be made within a reasonable time after its issue in order to render the drawer liable, and within a reasonable time after its indorsement, in order to render the indorser liable. In determining what is a reasonable time within the meaning of this section, regard shall be had to the nature of the bill, the usage of trade with respect to similar bills, and the facts of the particular case." This may be difficult to apply in practice, because the term "reasonable time" can be ambiguous.

Paragraph 1 of Article 17 in the Negotiable Instruments Law of The People's Republic of China stipulates: "The rights to the negotiable instruments shall expire if not exercised within the following time limits: within two years from the time of the maturity of the negotiable instruments for the right of the holder to the drawer and acceptor, or, within two years from the date of draft for bills and notes payable at sight." Moreover, Article 55 states :"A holder of a draft shall make presentation for payment according to the following time limits: 1. Presentation for payment shall be made to the payer within one month starting from the date of draft for a draft payable at sight ... ".

The two versions (No. 645 and No. 681) of ISBP both emphasize in paragraph 13: "Drafts, transport documents and insurance documents must be dated even if a credit does not expressly so require [emphasis added]". There is no language in ISBP indicating that that a draft may not be dated. ISBP is not a law but is a set of guidelines used widely by banking practitioners when checking documents under an L/C. But since ISBP makes clear that the date must be shown in drafts, it seems odd that DOCDEX Decision No. 260 drew the conclusion that a draft payable at sight need not be dated.

From the above analysis, it is clear that even for drafts payable at sight, the date of issue is required. Though the Bill of Exchange Act, 1882 takes a different view, it nonetheless stresses that for a draft payable on demand, the presentment for payment must be made within a reasonable time after its issue. This implies the importance of including a date of issue in a bill of exchange.

Wangxuehui (English name Ofei) is a Lecturer in the School of Economics and Management at Anhui Agricultural University in Hefei, Anhui, China. Her e-mail is ofeiliya@hotmail.com

1 "Bills of exchange payable at a fixed period after sight must be presented for acceptance within one year of their date. The drawer may abridge or extend this period. These periods may be abridged by the endorsers."

2 "A bill of exchange at sight is payable on presentment. It must be presented for payment within a year of its date. The drawer may abridge or extend this period. These periods may be abridged by the endorsers. The drawer may prescribe that a bill of exchange payable at sight must not be presented for payment before a named date. In this case, the period for presentation begins from the said date. "