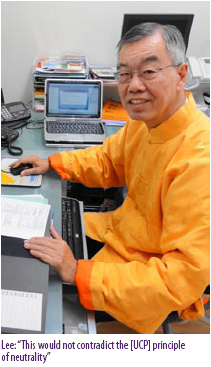 I'd like to follow up the article on forwarders' bills of lading by Sheilar Shaffer in the July-September issue of DCInsight.

The role of a freight forwarder ("forwarder") was created because of market needs following the advent of break bulk carriage. A forwarder generally performs the following tasks:

2. acting as a cargo broker, recommending the best options in terms of speed, freight rate and safety for an exporter's cargoes;

3. handling cargo receipts, pre-carriage, loading on board, unloading, Customs clearance, warehousing, and on carriage for exporters and importers; and

Following the arrival of full containerization, some large carriers began to provide forwarding services in order to regain control of tasks previously dominated by forwarders. In response, some international forwarders, in order to compete with large carriers, also started providing surface, sea and air carriage.

This is why it can be difficult to tell from a trade name whether the service provider is a carrier, a forwarder or both. Companies like NYK, Maersk and UPS play a double role in China trade, in seaports such as Yantian and Hong Kong.

Before looking at the different kinds of bills of lading (B/Ls), it's necessary to clarify the terms used in a B/L, such as the shipper, the carrier, the issuing party and the signing party.

According to ISBP 681 paragraph 22, the "issuing party" can be identified "if the document appears to be issued by the named person or entity. It may appear to be issued by a named person or entity by use of its letterhead or, if there is no letterhead, the document appears to have been completed or signed by, or on behalf of the named person or entity". According to ISBP 681 paragraphs 38 and 39, the "signing party" is the party who adds his signature by mechanical or electronic means in either the signatory box or some other suitable empty space within the paper or electronic document.

Different B/Ls can generally be issued and signed in the following manner:

Before touching on the concerns of the actual shipper/L/C beneficiary and the importer/ L/C applicant, it is necessary to understand the strengths of different classes of forwarders in the market place.

For simplicity, I will classify forwarders into three categories: large, medium and small. Large-sized forwarders are usually members of FIATA, an association formed by the big international forwarders having strong finance, human and other resources. These forwarders are under strict supervision by FIATA. Some of them, even though they are "contracting carriers", are even stronger than the so called "one-ship (actual) tramp carriers".

Medium-sized carriers tend to be members of local forwarders/logistics associations, such as NVOCC (Non Vessel Operating Common Carrier) in the US, CIFFA (Canadian International Freight Forwarders Association) in Canada or HAFFA (Hong Kong Association of Freight Forwarding and Logistics Ltd) in Hong Kong. For goods having a value of, say, not exceeding USD 500,000 (or a higher or lower value to be determined by the parties), I would suggest that their FBLs and HBLs should be acceptable to the parties, even if the L/C bears terms such as "Forwarder's B/L prohibited".

Small-sized forwarders are the so-called "one-man-forwarder" or "one-desk forwarder", having two or three companies sharing the same small office. They are weak financially and have limited human and other resources. My belief is that their FBLs and HBLs issued or signed in any capacity should not be accepted in L/C operations.

The unclear term "Forwarder's bill of lading prohibited" should not be used, as it may mean any of the above three kinds of B/Ls discussed above, either one in which the forwarder may act as the actual carrier (FBL), as agent of the shipping line (MBL) or as the contracting carrier (HBL). If, on the other hand, the term is used, the issuing bank should seek clarification from the applicant in accordance with ISBP 681 paragraph 2. Likewise, the advising bank should seek similar clarification from the issuing bank.

In practice, it may be difficult for the average document checker to identify the FBL and HBL. Therefore, terms like "Forwarder's or House Bill of Lading prohibited" should not be used at all. If any similar phrase is included, it would be better to state something like "Bill of lading issued and/or signed by a forwarder in any capacity not acceptable".

To avoid confusion, the following clause is recommended: "Bill of lading issued and/or signed by a forwarder in any capacity is prohibited except those from a member of FIATA or a local freight forwarders or logistics association such as NVOCC, CIFFA, and HAFFA, etc."

Finally, to end the FBL and HBL disputes once and for all, I strongly advise the drafters of the current ISBP 681 revision to include definitions of terms such as "actual carrier" (the carrier that provides the means of transport or the vessel/barge/feeder boat/truck/train/ airplane) and "contracting carrier" (the carrier that does not provide any means of transport and acts merely as a carrier by contract only), and to further clarify which type of carrier the respective transport article or sub article in UCP 600 actually refers to.

FIATA's Combined Transport Bill of Lading was accepted in sub-article 25 (d) of UCP 400, but was later removed in UCP 500 because, as explained at the time, ICC should play a neutral role and not endorse any particular organization. However, it is common sense that the ISBP 681 revision should accept a FBL or HBL from a member of FIATA, NVOCC, and any other local forwarders or logistics associations. This would not contradict the principle of neutrality.

"A document checker is unlikely to have T.O. Lee's knowledge of other industries ... " 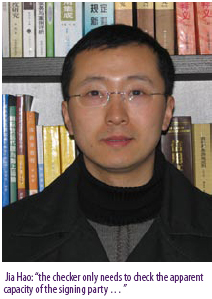 I would like to provide some feedback to T.O. Lee's article above from the perspective of a banker:

Under international standard banking practice, a document checker has no obligation to determine whether the signing party or issuer of a bill of lading (B/L) is a contracting carrier or an actual carrier. Instead, according to UCP 600, the checker only needs to check the apparent capacity of the signing party as carrier or master or their agents, irrespective of the signing party's business status as a freight forwarder or a shipping line. This rule facilitates the use of the credit as a certain and prompt payment tool by bankers.

Using this principle, when the credit clearly states: "B/L issued by freight forwarder is not acceptable" 3, a checker has to determine which party is the issuer of the B/L and then whether or not the issuer appears to be a freight forwarder (its business status) (e.g., as in ICC Opinion TA 572rev where the document presented contained the clause "FBL BIFA Negotiable FIATA Multimodal Transport Bill of Lading" or the name of the signing party includes in its name "freight forwarder"). Such a clear requirement is considered to explicitly and validly modify UCP 600 sub-article 14 (i) according to UCP 600 article 1 and may not be ignored. When there is such a requirement, I would suggest that the credit might as well ask for a beneficiary's certificate certifying that the party who issues the bill of lading is not a freight forwarder to avoid any future disputes and confusion.

In my view, a document checker is unlikely to have T.O. Lee's knowledge of other industries such as transportation or insurance, but if he is well equipped with knowledge of the UCP and international standard banking practice, he can also be a qualified checker. That is what the UCP, ISBP and L/C community are aiming for and is the unique appeal of the letter of credit mechanism.

T. O. Lee FAE MCIArb MITD is a member of UCP 600 Consulting Group, Fellow of Academy of Experts (LC) Gray's Inn, UK and Member of United Nations Multimodal Transport Association, Geneva. His website is www.tolee.com and his e-mail is experts@tolee.com.

JIA Hao is deputy head of the Trade Settlement Department of Bank of China, Frankfurt Branch. He is a member of International Standard Banking Practice (ISBP) Consulting Group, was a member of ICC China's L/C Expert Group (2006-2008) and regularly comments on draft ICC opinions and other L/C matters. His e-mail is yzjh99@yahoo.com.cn