Key decisions and innovations are set to change the understanding and landscape of traditional trade finance. 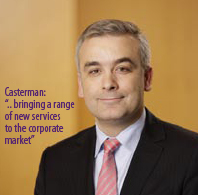 In processing over four billion financial messages a year on behalf of its 9700 customers in 210 countries, SWIFT is in a uniquely privileged position. In recent times, the monitoring of SWIFT traffic has been seen as a barometer of the world economy, reflecting as it does the trends in economic activity across four key business areas - payments, securities, treasury and trade.

Tuesday, 31 March 2011 marked another step on the road to economic recovery, as SWIFT recorded a new daily peak of 19,065,420 messages processed. This was an increase of more than half a million messages compared with the previous peak day in May 2010 and reflects a growth rate of some 11.4 per cent a year.

Banks can benefit from an analysis of their SWIFT transactional activity by making use of a service called "Watch". This solution provides rapid and direct access to business analytics about the individual company and the global financial industry as a whole. It also helps financial institutions to better understand their own business. Not only can they assess market share, they can also spot new opportunities, optimize the use of the correspondent network, allocate costs more effectively and improve operational efficiency.

SWIFT's Watch product comes in different shapes and sizes to suit individual needs. Value Analyser is the most recent innovation to the Watch portfolio. In response to market demand, SWIFT has obtained a special dispensation to conduct a limited amount of data mining in selected fields on selected messages and on selected dates. The Value Analyser now enables users to delve into message content in order to understand the true values behind transactional activity, using both amounts and currency information. By providing details for the most commonly used FIN messages, it helps financial institutions monitor total amounts by currency in relation to the different categories of messages. The results can be used to demonstrate how transactional activity is evolving and how this correlates to the total amount of traffic. This, in turn, helps to refine assessments of market share and manage the associated risks.

The availability of value-based data to complement the previous volume-based analyses of SWIFT traffic is particularly relevant for trade finance. It is commonly accepted that recent years have seen a progressive migration of trade business away from traditional trade instruments, such as letters of credit, in favour of open account. Whilst there is no single definitive source of information to evidence this trend, SWIFT is in a stronger position than most, given its unique insight into the evolution of traffic volumes - including Category 7 messages for letters of credit and guarantees, Category 4 messages for Collections and Category 1 and 2 messages for payments. Consequently, SWIFT is well qualified to share valuable information with ICC and others to enhance market understanding of overall trends in the trade finance business.

SWIFT contributes on an annual basis to the ICC Global Survey on Trade and Finance. This year was different, as SWIFT provided - for the first time - statistics on the value of trade finance gleaned from our Watch Value Analyser and regional volume statistics.

The most frequently used messages in each category were as follows: in Category 4 Message Type (MT) 400 (Advice of Payment); MT 410 (Acknowledgement); and MT 499 (Free Format). In Category 7, the most frequently used were the MT 799 (Free Format), MT 700 (Issue of a Documentary Credit) and MT 707 (Amendment to a Documentary Credit).

In December 2010, Asia-Pacific was the region that initiated 64 per cent of import transactions, because it sent almost 64 per cent of the MT 700s (in volume), followed by Europe-Eurozone with 11 per cent. But in average value (converted to USD), these two regions were not the highest. The largest number of L/Cs was issued by Asia-Pacific, and most of the Asia-Pacific traffic is intra-regional. This indicates that Asia-Pacific uses L/Cs far more than any other region and can help explain why the average value of an L/C in this region was not the highest (USD 516,000 for imports).

In March 2011, the ICC Banking Commission confirmed that it is extending its activities to the open account market. This indicates that trade bankers want to introduce industry standards in the growing market of open account/supply chain finance. The new rules to be developed should enable banks to respond in a collaborative way to changing needs expressed by their corporate customers.

Corporates are expecting multi-bank solutions in order to mitigate risk of transactions handled on open account, since most of today's proprietary solutions have no common foundations. The future ICC Bank Payment Obligation (BPO) rules and supporting ISO 20022 messages should offer banks the foundation to provide their corporate customers with multibanking services for global trade operated on open account terms.

The new ICC BPO Group co-chaired by ICC and SWIFT is steering this effort. On Monday, 21 March, the first meeting of the ICC BPO Working Group was convened in Zurich. This is where the work began, not only on drafting a new set of rules that will make commercial usage of SWIFT's BPO technology neutral, but that will also facilitate a broader understanding of the value that can be delivered by the formal endorsement and adoption of a new financial instrument - one supported not only by ICC rules but also by common ISO 20022 XML messaging standards.

During the ICC Banking Commission meetings, which followed over the next two days, there was much discussion surrounding the changing face of trade and trade finance. The Banking Commission celebrates its 80th anniversary this year, and over the years it has been a pioneering influence on business practice, developing rules that have reshaped the way trade finance has been conducted worldwide.Now, under the chairmanship of Tan Kah Chye, it is facing up to the challenges of the future by drafting a strategic business plan for 2011-2015.

As one step to implement this plan, the rules-making forum that took place on Wednesday 23 March sought to address the need for a next generation of rules and tools, focusing largely on open account and supply chain finance. In addition to the revisions in progress for the International Standard Banking Practice (ISBP) and the Uniform Rules for Demand Guarantees (URDG), additional topics, apart from the BPO, included factoring and forfaiting. A first draft of rules for the latter has already been sent out for comment.

The tantalizing question arising from all these activities is whether it may ultimately be possible to consider a set of rules that could govern the use, not only of the BPO, but also other financing instruments which reside somewhere between the extremities of, on the one hand, traditional trade and, on the other, open account, perhaps a kind of Uniform Customs and Practice for "open" credits.

On the SWIFT side, the trade and supply chain standards for the corporate-tobank segment for both traditional trade finance (MT 978) and open account (ISO 20022) have been extended. SWIFT now offers banks and corporates end-toend STP on the basis of public domain industry standards. These standards can be critical for corporate customers looking for multi-bank solutions, as they offer greater independence from their banking partners and software vendors. The MT 798 standards have already attracted major trade banks and are finding more and more traction in the corporate market.

Those developments will bring a range of new services to the corporate market - on the treasury as well as on the credit side.

André Casterman is Head of Cash, Trade and Supply Chain at SWIFT. His e-mail is andre.casterman@swift.com