Trade finance is an essential facility for world trade. But the safe, short-term and self-liquidating character of trade finance needs to be better recognized under the current Basel II and III frameworks. 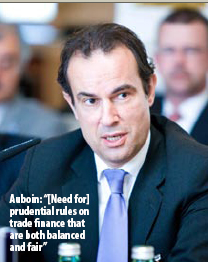 At last, evidence is now available to demonstrate that trade finance is one of the safest areas of international banking. Hence, it needs to maintain its status under international regulation.

There was a time when trade finance received favourable regulatory treatment. It was viewed as one of the safest, most collateralized, and self-liquidating forms of finance - although no systematic data was available to demonstrate it. This view was reflected in the capitalization for cross-border trade credit in the form of letters of credit and similar securitized instruments under the Basel I regulatory framework, put in place in the late 1980s and early 1990s. The Basel I text states that "Short- Term self-liquidating traderelated contingencies (such as documentary credits collateralised by the underlying shipments)" would be subject to a credit conversion factor equal or superior to 20% under the standard approach.

This meant that for unrated trade credit of US$1,000,000 to a corporation carrying a normal risk weight of 100 per cent, and hence a capital requirement of 8 per cent, the application of a credit conversion factor of 20 per cent would "cost" the bank US$16,000 in capital.

The basic text and credit conversion factor (CCF) value for trade finance was kept largely unchanged under Basel II. But issues of pro-cyclicality, maturity structure and credit risk later arose. In an internal rating-based and risk-weighted assets system, the amount of capitalization to backup lending depends on the estimated risk at a particular point in time and for a particular borrower. For financial institutions without the resources to operate their own models of credit risk estimation, the standardized approach provides guidelines of how to manage risk and allocate capital according to the wider proposed set of economic risk categories.

External credit ratings for cross-border lending under Basel II are based on benchmarks provided by international commercial ratings agencies. More sophisticated financial institutions rely on an "advanced internal rating-based" approach to estimate the credit risk, taking into account a number of compulsory criteria. Among the most contested of these is that, under Basel II, the country risk cannot be worse than any counterparty risk in that country - therefore, any deterioration of the country risk during a recession (like the recent one) will automatically and negatively affect the country risk regardless of the underlying creditworthiness of that counterparty.

It is alleged by bankers that trade-related lending is disadvantaged in low cycles because of the high concentration of lending on small and medium-sized enterprises and because of the de facto one-year maturity floor applied to trade credits (while most of this credit revolves every 90 to 180 days).

As noted by ICC in 2009, "the capital intensity of lending to mid-market companies under Basel II is four to five times higher than for equivalent transactions under Basel I." To alleviate some of the biases of Basel II concerning trade finance, a sentence made its way into the communiqué of the G-20 Leaders in London in April 2009, inviting regulators to exercise some flexibility in the application of these rules in support of trade finance. That has not been the case yet, and remains an issue for the G-20 to consider.

Generally, regulators temper the professionals' concerns with the following arguments: first, they say the 20 per cent CCF recognizes that trade credits are normally less risky than ordinary loans if secured. Second, acknowledging that the bulk of the trade finance business is in the hands of large international banks, the regulators also suggest that, under the advanced internal ratings-based approach, these institutions can determine their own estimates of the appropriate CCF to apply to a trade finance commitment when calculating the required amount of capital to back it up.

Finally, perhaps the most difficult issue facing trade financiers is the maturity cycle applied to the regulation of short-term trade lending. Countries have the option to waive the one-year maturity floor on the capitalization of trade finance commitments, but to date only the UK, Germany and Hong Kong's regulators have done so.

Notwithstanding the treatment of trade finance in Basel II, trade finance may be facing another hurdle under the newly adopted package of regulatory measures, commonly called Basel III. One of the key measures in this package aims to reduce systemic risk by supplementing enhanced risk-based capital requirements with a leverage ratio - hence reducing incentives for "leveraging". Reducing these incentives is an objective generally shared by the community of international organizations, be they responsible for finance, macroeconomics or trade. The "leverage" ratio would apply above a certain threshold of capital in the form of a flat 100 per cent CCF to certain off-balance-sheet items, though it is alleged that the ratio is not risk-based. The issue for the trading community is that this would include "unconditionally cancellable commitments, direct credit substitutes, acceptances, standby letters of credit, trade letters of credit, failed transactions and unsettled securities".

This provision is fuelling fears in the trade finance industry. While capital-wise, the in-balance-sheet treatment of trade credit seems not to have changed, many trade financiers believe the proposed CCF for off-balance-sheet operations will result in a five-fold increase relative to the 20 per cent credit conversion factor used under Basel II for stand-by letters of credit and similar trade bills - as well as for other any other kind of off-balance-sheet assets.

While there is logic in tightening the treatment of some toxic off-balance-sheet financial instruments, there was clearly a misunderstanding regarding the application of stricter regulation to letters of credit and similar trade bills. It is based on the fact that there is no evidence historically - or recently - that these exposures have ever been used as "a source of leverage", given that they are supported by an underlying transaction that involves either movement of goods or the provision of a service.

The question of why off-balance-sheet trade exposures are not being automatically incorporated into the balance-sheet (to avoid the leverage ratio) is one of process. The processing of letters of credit, which are highly documented for the financial transactions' own security, involves off-balance-sheet treatment, at least until such time as the verification of the documentation is finalized - a process that has existed a long time. The financial crisis has even resulted in greater scrutiny of such documentation.

The rigour of the process of document verification is at the very heart of what a letter of credit is, and testifies to its safety. Given the high rejection rate of poorly documented letters of credit (up to 75 per cent for first submissions), and the fact that, if definitively rejected, the letter of credit might not even enter the balance-sheet, it is argued that the off-balance-sheet management of these exposures is necessary and, in most cases, only a temporary treatment of what will eventually become an on-balance-sheet commitment.

The perceived five-fold increase in capital requirements for off-balance-sheet letters of credit would increase the costs of banks that offer these risk-mitigation products. Either these costs will be passed on to customers, hence making even more difficult to smaller businesses to trade internationally, or, in the absence of incentives to issue letters of credit, customers may simply choose to use onbalance- sheet products such as overdrafts to import goods. The latter carry less stringent documentary requirements and are potentially far riskier for the banking sector in general.

Finally, the issue has great importance for developing countries' trade. Unlike in developed countries, open account financing is neither appreciated by, nor necessarily accessible to, many developing countries. Traditional letters of credit bring more security and are more widely used. Given that world trade is likely to be driven by South-South trade in the future, the prudential treatment (and reasonable cost) of letters of credit is critical for developing and emerging market economies.

The G-20 in Seoul, while adopting the Basel III package, asked the Basel Committee to "evaluate the unintended consequences" of some of the measures described above. A presentation of this evaluation is expected in the autumn of 2011, before the next G-20 Summit in Cannes. While the Committee does not intend to reduce the attractiveness of secured trade finance instruments, financial regulation is inherently complex and requires the understanding of all sides.

In issues that are at the crossroads of trade and financial regulation, there needs to be a thorough examination of both cultures and instruments. Prior to the Basel Committee's evaluation of these "unintended consequences", the trade finance community has worked hard to provide solid evidence that trade finance is one of the safest propositions in finance.

With the encouragement of WTO's Expert Group on Trade Finance, the world's leading banks have decided, in tandem with the Asian Development Bank and ICC, to establish a loss default registry on trade finance. Initial results have indicated that, in the past five years, out of a total of transactions worth US$2.5 trillion, the default rate on trade finance transactions was only 0.2 per cent (complete results can be found on the ICC's website, www.iccwbo.org under "Banking Technique and Practice"). These results have been presented to the Basel Committee.

ICC has committed to expand the registry by increasing the number of participating banks and making comprehensive information accessible to international regulators. This initiative will increase the understanding between the regulatory and trade communities and will help demonstrate that the trade finance community provides a cautious and sustainable model of banking that has financed the expansion of international trade without major hurdles up to and including the recent crisis. Banks wishing to provide information to the registry should contact Thierry Senechal at ICC, e-mail: tsl@iccwbo.org.

The trade and regulatory communities should continue their dialogue with the aim of encouraging regulators to devise prudential rules on trade finance that are both balanced and fair.

Marc Auboin is Economic Councellor at the World Trade Organization (WTO). This article represents his own views and not necessarily those of WTO.