The UCP in court

Following my previous DCInsight articles - "Recent stop payment order cases in China"1and "Negotiation: the proper interpretation" 2 - I would like to update readers on developments in the alleged fraud cases adjudicated by various intermediate courts in China. This article will only examine what constitutes negotiation in good faith.

1. A series of usance L/Cs (90 days sight) were issued by a number of Chinese banks in China;

3. The L/Cs were available with any bank by negotiation and were subject to UCP 600;

4. All of the presented documents were duly accepted by the issuing banks with confirmed maturity dates of payment;

5. The L/Cs in dispute called for original godown warrants;

6. Taking advantage of the usance period, the ultimate buyer either:

(a) submitted the warrants to the godown for cancellation and re-issuance of new warrants with different warrant numbers and in denominations which were then presented by its connected overseas companies under other L/Cs; or

(b) if there was not enough time to obtain new warrants, the ultimate buyer simply passed the warrants back to its connected overseas companies for drawing under other L/Cs. Note that no new warrant was issued unless the original warrant was returned to the godown for cancellation. It follows that each warrant at the time of negotiation was a genuine document, since the holder could actually take delivery of the corresponding goods from the godown;

(c) In the cases where import agents were named as applicants, these companies (for unknown reasons) released the warrants to the ultimate buyer prior to their receipt of full payment, so that the ultimate buyer could repeat the actions set out in sub-paragraphs (a) and (b) above. Because of the repetitive circulation of the warrants for the same lot of goods during the usance period, the trading volume was multiplied many times. The mechanism was similar to cheque kiting.

8. In many jurisdictions, including China, a negotiating bank which has negotiated presented documents in good faith, for value and without notice of fraud at the time of negotiation, is immune from the fraud exception. The courts rejected all the arguments alleged by the plaintiffs and ruled that the financing bank was a negotiating bank under UCP 600. This view is consistent with the two ICC DOCDEX decisions (Nos. 291 and 297) rendered in connection with these cases. The remaining outstanding issue was whether the courts considered that the negotiating bank acted in good faith and was entitled to reimbursement from the issuing banks.

What does "good faith" mean? Under section 90 of the Bills of Exchange Act of England: "A thing is deemed to be done in good faith, within the meaning of this Act, where it is in fact done honestly, whether it is done negligently or not."

"However gross the holder's negligence, if it stops short of fraud, he has a title." Negligence, however gross, cannot therefore be equated with "not in good faith". The key element of good faith is the state of mind of the person, i.e., whether he/she has acted honestly at the moment he takes the action.

On 28 May 2009, The Supreme People's Court of China issued an investigation report, "How People's Courts should handle the L/C cases under the current financial crisis", which states: "In our view, a breach of contract, even a fundamental breach, cannot be lightly classified as L/C fraud. At the same time, to avoid an abuse of fraud exception, we have raised the bar for the application of L/C fraud when we drafted the Provisions on Some Issues in the Adjudication of L/C Cases 3. In legal proceedings, to determine whether there is L/C fraud, one cannot just look at the actions taken. More importantly, one must decide whether the party has a subjective intent to defraud in order to avoid an abuse of fraud exception. In a trial, the key principle that the party who alleges an accusation bears the burden of proof must be strictly observed. The trial judge, based on the evidence produced, must be totally convinced that the actions and behaviour of the parties constitute L/C fraud."

It is clear that the subjective test rather than an objective test applies in determining L/C fraud under both Chinese and English law, i.e., the subjective intent to defraud must exist and the party who alleges such accusation bears the burden to prove the existence of such intent.

Note that "not in good faith" is an extremely serious accusation against a bank. It is therefore necessary that courts also consider the following issues before it draws any conclusion:

1. Why did the negotiating bank not act in good faith? Did it receive an exorbitant return out of the transactions?

If the plaintiffs cannot produce cogent evidence on the above issues, the transaction likely will be deemed to have been performed in good faith, since the plaintiffs bear the burden of proof.

The courts held that objectively the negotiating bank committed mistakes and/or was wrongful when it advised the group how to set up offshore companies, opened offshore accounts, advised L/Cs, examined documents and effected the transfer of funds between the group of companies. It followed that the negotiating bank actually knew or should have known that the foreign companies were controlled by the same group and that the relevant transactions were between connected parties set up for an illegal purpose without any genuine underlying transactions.

In my view, the application of an objective test as evidenced by the word "objectively" and the phrase "should have known" is fundamentally incorrect in deciding whether the negotiating bank acted in good faith. To negate good faith, a motive or intent to defraud instead of mistakes must be proved. 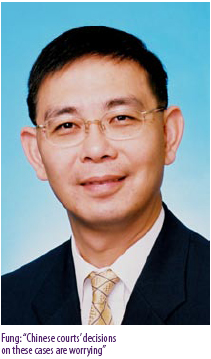 Moreover, the courts appear to have drawn their conclusion using hindsight when the L/Cs turned out to be a scam. To determine the subjective state of mind of someone, the judges should have stepped into the shoes of that person at the time of negotiation, but not afterwards.

From a commercial and legal perspective, it is neither uncommon nor illegal for an entity to set up overseas related companies. Accordingly, I believe it to be conceptually incorrect for the courts, with hindsight, to assume or draw the inference that financing connected-party transactions must be a scam. More importantly, a majority of the L/Cs showed the import agents as applicants, so it would be impossible for the nominated banks to identify the transactions as connected transactions. Even if the ultimate buyer were named as the applicant, it did not necessarily mean that a connected-party transaction was not at arms length, or that it must have been fraudulent. In addition, the courts failed to satisfy itself that, based on the information available to the negotiating bank, the only inference to draw was that of fraud.

Conversely, based on the statements obtained by the Chinese police, both the import agents and issuing banks knew that the relevant transactions were connected- party transactions and that they had been transacted in that way for several years. If this knowledge were deemed to be actual notice of fraud, the issuing banks and import agents should have all been treated as participants in the scam.

It is recognized that an issuing bank instead of a negotiating bank bears the primary responsibility to investigate the background of the parties and assess the risks of a transaction when it grants credit facilities to the applicants or issues L/Cs. Had the issuing bank not issued usance L/Cs, the ultimate buyer would not have had the chance to take advantage of the usance period and would have made repeated presentations of the same or reissued warrants under different L/Cs. Had the import agents strictly observed the import agency contracts by insisting on full payment before they released the warrants to the ultimate buyer, the ultimate buyer could never have performed the kiting process.

The issuing bank and import agents, therefore, lost their rights to the goods because they willingly accepted the credit risk of the ultimate buyer, but this was not caused by the so-called "negotiation not in good faith", since the relevant warrants were all genuine documents supported by corresponding goods in the godown.

If the courts' logic is applied, the negotiating bank committed no fault in negotiating the reissued warrants, since such warrants had never been presented before. Why, then, did the courts enjoin payment for the presentations of these new warrants? In any event, demanding that a negotiating bank identify whether a document has been previously presented under other L/Cs is a mission impossible and goes far beyond the UCP requirements. First, there is nothing wrong if a godown warrant is re-circulated in the L/C system, since commodities, for example, could be traded using a string of sales.

Second, it is this writer's understanding that even the relevant issuing banks in China cannot identify any repeat presentation of documents when they negotiate export L/Cs. Consequently, it appears that the courts adopted a standard that deviated from both local and international practice. This also explains why two issuing banks effected payments to the negotiating banks irrespective of the injunctions obtained by other Chinese banks. One issuing bank even filed an objection with the Chinese courts stating that it was obligated to reimburse the negotiating bank notwithstanding the alleged fraud. Unfortunately, this objection was not accepted by the court.

Finally, the judgment failed to explain why the negotiating bank had not acted in good faith. What was the motive? Neither the police nor the courts could identify the natural person(s) who carried out the alleged malicious acts. There was no evidence showing that the negotiating bank or any of its staff had obtained any illegal benefits by the transactions. If the courts cannot identify either the motive or the natural person(s) who failed to act in good faith, how could they satisfy themselves concerning the intent to defraud? Without the intent to defraud, a conclusion that the L/C negotiation was not in good faith is unfounded and unsustainable.

In my view, the Chinese courts' decisions on these cases are worrisome and, if taken to their logical extreme, could destroy the integrity of L/Cs issued by banks in China as well as the Provisions on Some Issues in the Adjudication of L/C Cases. To the writer's knowledge, the relevant cases are now under appeal. Hopefully, the High Courts of China can put the issues in perspective and uphold the integrity of L/Cs and the proper application of UCP 600 in China. DCInsight will report on the follow-up to these cases.

King-tak Fung is a Banking Partner of Eversheds Hong Kong, a member of the ICC Consulting Group on UCP 500 revision and Forfaiting, author of Leading Court Cases on Letters of Credit (www.iccbooks.com) and UCP 600 - Legal Analysis and Case Studies (www.peer.com.hk). His e-mail is ktfung@eversheds.com