The supply chain finance (SCF) market - the term used by banks to refer to approved payables financing or early payment services - has grown significantly over the last five years. These services have demonstrated their relevance and value to large buyers and their suppliers. The now widely available SCF offerings offered by banks and non-bank technology providers have been built on the fact that buyers and sellers wish to work in a win-win spirit as large buyers aim to support their suppliers' working capital needs.

Typically buyers facilitate early payments to their suppliers via one of their banking partners. Buyers, therefore, approve invoices as early as possible in the process in order to maximize the financing opportunity for suppliers in need of working capital. These services have also validated that banks are ready to extend financing to their clients using electronic and automated transaction flows as they have done in payments and cash management services for more than 20 years.

Figure 1 on the next page shows the current scope of SCF services which are triggered very late in the transaction lifecycle, i.e., once the invoice has been approved, whereas the customers' needs start as soon as the purchase order is agreed, i.e., when the supply chain starts.

The progress made by banks in this market has not been without challenges. Most of the services have been developed independently by each bank and do not make use of any common foundations. Typical drawbacks reported by practitioners can be summarized as follows:

• Late start. Approved payables financing services begin at the penultimate stage of trade transactions when the invoices are approved, whereas the corporates' needs for financing and mitigating risk start much earlier, when the purchase order is presented. The real opportunity for banks is to get involved as early as possible in the transaction cycle.

• Limited to large buyers. Today's SCF offerings are rolled out as buyer-specific programs and mainly address large buyers, whereas the real SCF opportunity extends to large sellers too, particularly in terms of payment assurance.

• Supplier on boarding raises costs. In most cases, current offerings require the buyer's counterparties - the suppliers - to be enlisted on the buyer's bank portal. The multitude of SCF platforms generates operational issues for suppliers wishing to benefit from various SCF offerings via their buyers' banks. Ideally, suppliers would be served by their chosen - often local - banking partner, not by their buyers' banking partners. 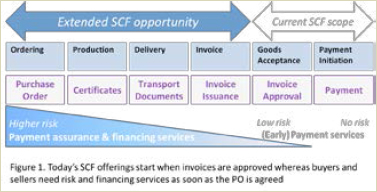 • Know-Your-Customer (KYC) costs. Most banks require KYC checks to be performed on suppliers being enlisted as new customers, which is increasing the total processing cost and putting the business case for the bank at risk.

• Proprietary formats. Today's offerings make use of proprietary formats, which makes it more complex and costly for corporate clients to integrate them in their internal applications (e.g., ERPs), whereas all players want to benefit from end-to-end automation to limit processing costs.

• Lack of standardized product definitions. The naming and definitions of the various SCF services varies from one bank to the other, which makes it difficult for clients to compare offerings and to consider switching from one provider to another.

The ICC and SWIFT legal and operational standards for SCF, i.e., the new Bank Payment Obligation and supporting ISO 20022 messaging standards, will help address those limitations and bring the market to new levels both in market size and product scope. By introducing these standards, banks aim to move the market from the 3-corner (or single-bank closed model) to the 4-corner model (or two-bank interoperable model). Banks also intend to extend their offerings beyond the current early payment services. Here is how: 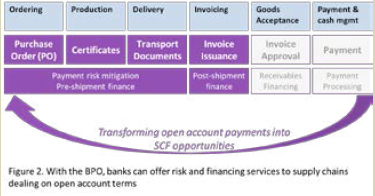 • Involving the supplier's bank. Moving from the typical 3-corner to the 4-corner model will allow large banks to extend their SCF services by involving local banks. The 4-corner model will enable correspondent banks to reach out to a larger number of suppliers, usually the SMEs. This needs to be done by relying on local banks, which can best assess SMEs' performance risks. It will also eliminate the need for the buyers' banks to on board suppliers, as well as the related KYC costs, since the two-bank model relies on the relationship between the supplier and its own bank.

• Early start. By providing SCF offerings at the very beginning of the transaction, banks will be able to address requirements such as the provision of pre-shipment finance, which is required as soon as the purchase order is agreed. They will also be in a position to provide payment assurance, which is critical for sellers at the very early stage of the transaction. Extending the payables financing services to the pre-approval stage will also be possible, well before the approval of the invoice. As shown in figure 2, the Bank Payment Obligation enables banks to extend their SCF offerings to higher value services.

André Casterman is Global Head of Corporate and Supply Chain Markets at SWIFT, a member of the Banking Executive Committee at ICC and Co-Chair of the Bank Payment Obligation project. His e-mail is Andre.Casterman@swift.com