﻿ Article: How L/Cs are faring in the economic turmoil: a view from four countries - China: "It's not as easy ... to obtain a Chinese bank's approval" Author: by Wang Shanlun Published in: DCInsight Vol. 15 No.2 April - June 2009 Link: http://localhost:82/content/tfb/DCInsight/DCI_Vol15n2_4Countries_China.htm?l1=Trade+Finance&l2=DC+Insight&l3=DCInsight+Vol.+15+No.2+April+-+June+2009

China: "It's not as easy ... to obtain a Chinese bank's approval" 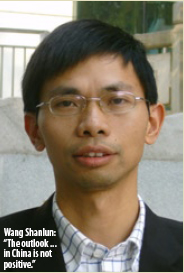 The outlook for international trade in China is not positive. The latest statistics from China's General Administration of Customs revealed that Chinese exports recorded their biggest decline in last ten years in January, falling 17.5 per cent from the same month in 2008 as the impact of the global financial crisis hit home. Over the last few months, imports to China plummeted a dramatic 43.1 per cent, a further indication of sharply lower demand in the Chinese economy. And during the last three months, both exports and imports experienced a continuous and accelerating decline. This also has happened for the first time in the last ten years. 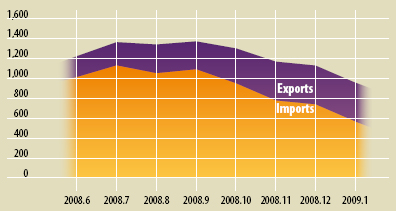 China is the world's manufacturing centre, and most Chinese coastal smalland medium-sized enterprises (SMEs) are exclusively export-oriented, relying on foreign demand, especially from the US and Europe. Once there is shortage of foreign orders, these companies are threatened with closure. And when SMEs close down, this creates operational difficulties for their related (upstream and downstream) enterprises.

Although the Chinese central government launched a RMB4 trillion rescue package to stimulate the economy, it is still difficult for most export-oriented enterprises to share in a piece of the cake, because they are not able to transform themselves overnight.

What's worse, some foreign investors have had to withdraw capital from their investment projects in China, either because they have problems of their own, or because their investments in China are in difficulty. In November 2008, in a rare move, four Chinese governmental authorities (Ministry of Commerce, Ministry of Foreign Affairs, Ministry of Justice, and Ministry of Public Security) published a joint circular entitled "Guidelines for the stakeholder's cross-border litigation against abnormal divestment from China," which demonstrates the seriousness of the divestment issue.

In short, the Chinese economy seems trapped in a vicious circle, and the L/C market is no exception.

Some 50-60 per cent of China's foreign trade is transacted by using L/Cs. Consequently, the country's total L/C figures (whether in terms of value or quantity) shrink sharply when China's trade volume declines. The figures from Chinese banks reveal the seriousness of the situation: the amount of incoming L/Cs declined 30-40 per cent, and the amount of newly issued L/Cs declined 40-60 per cent compared with the same period in 2008.

Under the impact of the worldwide financial tsunami, many commercial banks have gone bankrupt; more and more banks are on the problem list; and many banks' and firms' credit ratings are on a downward trend.

When banks are busily looking for self-protection, one consequence is that, at times, the UCP rules may be overlooked. There are more and more cases involving bad banking practice, such as wrongful dishonour, delayed payments, and so forth. An expert from Sinosure (China Export & Credit Insurance Corp.) stated that more than 50 per cent of China's export trade is settled by L/Cs, and found that the average rate of bad debts is as high as 5-10 per cent. The average time accounts are in arrears is now around 60 days.

Following are some cases indicating how L/C practice is being affected these days.

A Canadian importer issued a non-bank L/C to a Chinese exporter through a financial firm in the US. The consignee on the AWB was the non-bank issuer as required. The Chinese exporter delivered the goods by air in an amount of USD 690,000.00, but the issuer authorized the importer to take delivery in its name, while refusing the exporter's documents. The case is still unsettled.

According to the introduction to UCP 600, approximately 70 per cent of documents presented under letters of credit are rejected on first presentation. But many of the rejected documents are later accepted by the applicant, as long as the market is stable and the buyer still wants to take delivery. Therefore, the 70 per cent rejection rate is really the nominal rate, while the real rate is much lower.

But today the situation has changed. Many Chinese exporters find that their buyers definitively reject discrepant documents. In early February, an exporter based in Foshan, Guangdong Province received back a consignment of garments (valued at over USD 400,000.00) from New York, because the documents were first rejected by the issuing bank, then by the buyer. "The buyer didn't want to extend the L/C and promised to accept the documents as it did many times before, but now it rejects them, giving as a reason 'late shipment'. I know the real reason is that the buyer is short of money," said Wong Dacheng, general manager of the exporting company. He adds: "We don't know how to deal with these garments, as they were made to fit the buyer's special requirements."

The Chinese central bank has cut interest rates several times since September 2008. In the meantime, the government has abandoned quotas for new credit growth and has urged state-owned commercial banks to help finance a RMB4 trillion spending plan over two years. But most of the new lending goes to those large-scale enterprises that commit to infrastructure projects, whereas lending policies to vast numbers of SMEs have still not been loosened by smaller banks.

As a successful banking product, an L/C has two basic functions: settlement and finance. Most Chinese traders prefer the finance function to the settlement one. In the export business, because they are short of capital, Chinese exporters need their foreign buyer's L/C to obtain financing before the shipment to buy the raw materials, enabling them to manufacture and sell the goods. This is called the packing credit (pre-shipment finance). After shipment, negotiation or forfaiting provide other financial possibilities for exporters. But due to the increasing uncertainty surrounding future repayments from foreign banks, Chinese banks are reluctant to release L/C-based finance to eager-for-cash exporters.

On the other hand, importers need banks' L/Cs to assure payment to their foreign suppliers. Though there are no new restrictions on L/C issuance, importers are gradually finding that it's not as easy as before to obtain a Chinese bank's approval. In short, in the current situation, each party tends to be more cautious.

When there are financial or credit problems, in principle there should be more demand for L/Cs to serve as a lubricant for international commerce. That is why optimists believe the worldwide financial turmoil will lead to a renaissance of L/Cs.

Part of our current problems is the result of a psychological panic rather than real threats (though some of the threats are real enough). Emotional reactions lead to a lack of confidence in the future of the world economy. Because the L/C is one instrument providing a certain level of security, my own belief is that it will play an important role in restoring the confidence we need.

Wang Shanlun is an Associate Professor lecturing at Jiangxi University of Finance and Economics, in China. He has had 15 years of experience in studying, practising and lecturing on letters of credit. His e-mail is wangshanlun@ jxufe.edu.cn