At the request of the World Trade Organisation (WTO), the ICC Banking Commission, in cooperation with SWIFT and a number of other partners, conducted a survey of trade finance developments in recent months. The final version of the survey, which was based on responses from 122 banks in 59 countries, will be released in April. Following are several excerpts from the draft text.

"Our partner in this study, SWIFT, has provided statistics on trade volumes for the year 2008 and early 2009. Figure 1 shows a general decrease in global traffic in 2008-2009 for Category 4 messages (collections and cash letters) and Category 7 messages (documentary credits and guarantees). Out of almost 12 million transactions recorded worldwide by SWIFT in 2007, the figure decreased to about 10.5 million in 2008, or an overall decrease of 12.5 per cent over one year." 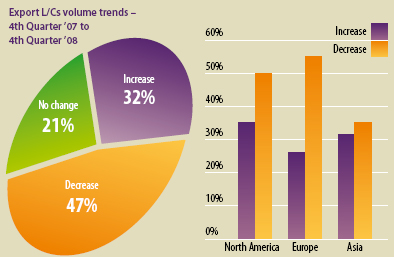 "Tight credit conditions have considerably reduced access to trade finance. 51 per cent of respondents indicated that their trade credit lines for financial institutions decreased between last quarter 2007 and last quarter 2008."

"There is intense scrutiny from some banks, eventually leading to higher rates of rejection of trade documents on the basis of minor discrepancies. The ICC Survey notes that 48 per cent of respondents, when acting in the capacity of a nominated bank, indicated that they had experienced an increase in the number of spurious/ questionable refusals.

- 20 per cent of respondents, when acting in the capacity of an issuing bank, indicated that there has been increased pressure from applicants to refuse documents. The main reason cited is 'falling commodity prices';

- 48 per cent of respondents, when acting in the capacity of a nominated bank, indicated that they had experienced an increase in the number of spurious/questionable refusals."

"Many banks report an increase in demand for documentary credits. Open account sales are less common in the present situation because they substantially increase the risk for the seller. Unstable markets are perceived as a threat because they may motivate importers to try to escape obligations under their contracts.

"Trade finance is still open today but limited. Shortage of liquidity and disproportionate aversion to risk have driven up interest rates on loans and advances in many countries, especially in emerging markets. For instance, 52 per cent of respondents indicated that they had experienced an increase in confirmation requests between last quarter 2007 and last quarter 2008. Again, this reflects the increased security sought by exporters and the perceived payment risk of the country of the issuing bank.

- The current environment is creating a risk-averse culture, both amongst banks and traders. From the ICC Survey, it is still evident that banks keep reporting customers asking for confirmed letters of credit where they previously dealt with unconfirmed letters of credit, CAD (cash against documents) or open account. However, bank perception of risk is leading to tightening liquidity in some instances and therefore greater difficulty in obtaining bank confirmations. In March 2009, we conclude that this situation still prevails.

- By increasing the amount of capital banks are required to hold against trade finance lending, each of the above factors significantly restricts the ability of banks to lend essential short-term credit to businesses in the current, capital-constrained environment. As such, many respondents to the ICC UK survey believed that changes to the treatment of trade finance under Basel II are required to ensure sufficient flows of trade finance during the current economic downturn.

- The ICC Survey has confirmed that the current global financial crisis has severely affected financial institutions and markets worldwide. This is a challenging economic environment, and trade volumes may be further impacted in the coming months. On a global basis, the respondents foresee that different regions will experience major economic slowdowns in 2009, in particular the Asia/Pacific region. The previsions for 2010 remain cautious; many predict that the economic turmoil will continue to predominate.

- The majority of financial institutions have restricted and limited their lending policies and activities, which has overall negative implications for liquidity in the financial markets. There is a global concern that if the recession deepens, capital costs will increase further, thus exacerbating current trends. Banks remain focused on how to best structure and manage their working capital needs in this environment. This encompasses providing guidance concerning decisions on new ventures, knowledge of counterparties, better structure of deals and assessing cross-border liquidity to obtain the best leverage possible."

For a copy of the final ICC survey, contact Whitney Jacob at e-mail wjb@iccwbo.org