﻿ Article: How L/Cs are faring in the economic turmoil: a view from four countries - Israel: " ... a marked decrease in L/Cs issued by Israeli banks" Author: by Sarah Younger Published in: DCInsight Vol. 15 No.2 April - June 2009 Link: http://localhost:82/content/tfb/DCInsight/DCI_Vol15n2_4Countries_Israel.htm?l1=Trade+Finance&l2=DC+Insight&l3=DCInsight+Vol.+15+No.2+April+-+June+2009

Israel: " ... a marked decrease in L/Cs issued by Israeli banks"

The global financial crisis, which has led us into an economic crisis, caught Israel during one of its longest periods of economic growth (2003-2008). 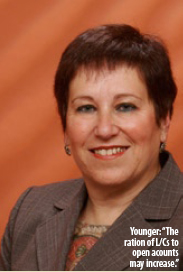 Since 2004, the Israeli economy has grown at a rate exceeding 5 per cent per year, and this upward trend continued during 2008, albeit at the more moderate pace of 4.1 per cent. This impressive growth over the last few years is a result of an increase in both exports and domestic demand. Moreover, Israel's positive macroeconomic condition has contributed to the stability and resilience of the Israeli banking system.

One of the most important growth engines for Israel was, and still is, the high-tech sector. This industry has been growing over the past two decades, placing Israel at the forefront of the high-tech industry worldwide.

The moderate 4.1 per cent growth rate in 2008 reflects the beginning of the direct and indirect effects of the sharp slowdown in the global economy. Significant negative effects began to appear throughout the second half of 2008 and will also be evident during 2009. The forecast for the Israeli business sector in 2009 is negative growth, with a decrease of approximately 3 per cent or more in international trade volume.

International trade is one of the fundamentals of the Israeli economy. No less than 50 per cent of the GDP is derived from exports. Moreover, exports have been Israel's growth engine, helping the Israeli economy out of the recession that started in late 2000 and came to an end in mid 2003.

Over the last few years, the current account deficit was in surplus. As to the trade account, in 2006-2007 the expansion in the volume of exports outpaced that of imports. In 2008, the value of goods exported from Israel was USD 51 billion, and the value of the goods imported to Israel was USD 64 billion.

Israel exports mainly high-end goods, such as high-tech, electronic, and pharmaceutical products (48 per cent), chemicals, petrochemicals and machinery (23.5 per cent), base metals, plastics and rubber goods (9 per cent), and others (9 per cent).

Israel's largest regional trade partner is Turkey. In 2008, Israel imported goods from Turkey for a value of USD 1.8 billion and exported goods to Turkey in the value of USD 1.6 billion. From 2005 to 2007, the average annual growth rate of imports and exports with Israel's neighbors in the Middle East (as mentioned above) was 14.0 per cent. In comparison, the average annual growth rate of trade with the EU countries was 9.7 per cent.

In recent years, international trade has been constantly evolving as a result of globalization on the one hand, and the development of the Internet on the other. These historic revolutions caused a dramatic shift from L/C-based trade to more open account buyer and supplier relationships.

During the last ten years, the ratio of L/Cs to overall trade-related transactions in Israel (in terms of the number of transactions) has decreased from 12 per cent to about 4 per cent. The majority of import L/Cs issued are for Asian countries, primarily mainland China, Taiwan, South Korea and India. Only a minority are issued to European exporters, although the size of imports to Israel from Europe is higher than those coming from Asia.

On the export side, most Israeli export transactions are open account-based, backed by either the Israeli ECA, or by private insurance companies. Israeli exports to less-developed countries are usually backed by L/Cs or full advance payments.

It's important to note that the use of open account has accelerated due to the development of the Israeli factoring/discount of receivables market. As mentioned above, the use of insurance coverage to mitigate credit risk enables local Israeli banks to discount insured receivables, enhancing the cash flow of exporters.

Will L/Cs once again take a senior position in terms of usage, as a result of the present financial and economic crisis? At present in Israel, the answer is "not yet". On the contrary, we have noticed a marked decrease in L/Cs issued by Israeli banks over the last few months, even in comparison to documentary collections and open accounts.

The main reason for this during the last quarter of 2008 emanates from the economic slowdown, and this decrease is forecast to continue through 2009. When L/Cs are received by an Israeli exporter from banks in LDC countries or from banks/countries that have been downgraded, confirmations are requested. Due to the crisis, the price of mitigating these risks has increased, as have the CDS rates of banks and countries.

During times when prices are steep, the exporter must make the difficult choice of whether to pay the growing cost, which eats away at his profitability, in exchange for mitigating credit risk and keeping his business flowing.

Regarding the risk appetite of the banks, we see a growth in the usage of insurance, country risk, and credit when they add confirmations or discount L/Cs issued by smaller banks based in less developed countries.

Do we see the beginning of a trend of banks withdrawing from their obligations as a result of the crisis? Lately, there have been several incidents of some banks, including global banks, trying to renege on their obligations regarding L/Cs or demand guarantees. One case even included a violation of the UCP 600 rules, in which discrepant documents were handed over to the applicant where only partial payment was effected, without the approval of the issuing bank.

In the past, such incidents only occurred with lower-rated banks. However, lately, as mentioned above, such cases have occurred more frequently and with the involvement of better-rated banks or countries.

As noted earlier, Israel was in a somewhat better economic and financial position than other countries when the crisis erupted. However, the Israeli government in cooperation with the Bank of Israel took several measures in order to assist the market:

- the Bank of Israel is currently purchasing USD up to a certain amount in order to strengthen the USD versus the NIS, for the benefit of Israeli exporters, who receive payments for exported goods and services in USD, although their expenses are in NIS.

The 2009 projection for the reduction in Israeli GDP (-0.2 per cent) and foreign trade (-3.0 per cent) will certainly bring a lower number of L/Cs. However, the ratio of L/Cs to open account may increase if the economic crisis deepens.

We all hope that the seeds of growth will sprout at the end of this year.

Sarah Younger is the Head of International Trade and Payments at Bank Leumi le-Israel. She is also the Chair of the ICC-Israeli Banking Committee. Her e-mail is sarahy@bll.co.il