Since the Supreme People's Court of China promulgated the Provisions on Some Issues in the Adjudication of L/C Cases (the "Provisions") on 1 January 2006, there have been fewer L/C cases in which Chinese courts have issued stop-payment orders. Because the Provisions provide clear guidelines as to the application of the "fraud exception" and the conditions under which an L/C stop-payment order can be issued or lifted, most of these orders were duly lifted when an appeal, supported by cogent evidence, was lodged at the High Court level. This writer, in the process of handling these cases, has been deeply impressed by the clarity of the Provisions and the strict adherence to the rule by various courts in China. 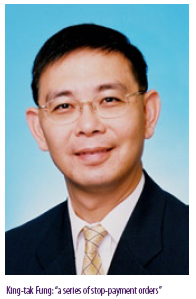 However, amid the economic turmoil, several cases have recently emerged to challenge the integrity of the Chinese judiciary and L/Cs issued by banks in China.

For the purpose of this article, emphasis will be placed on three major areas of the Provisions:

1. application of the fraud exception (Articles 8-9);

2. conditions for the application of a stop payment order (Articles 10-11); and

3. legal procedures for the discharge of a stop payment order (Article 13).

I will examine several recent L/C stop payment order cases in China which have, in one way or another, violated the Provisions.

A few months ago, when certain commodity prices plunged significantly, three stop-payment order cases occurred in northeastern China. In these cases, the buyers all applied for these orders from local courts and requested substantial price cuts. Not only did the issuing banks raise invalid discrepancies, the buyers also alleged fraud, which, under Articles 8 and 9 of the Provisions, entitles courts to grant stop-payment orders prohibiting issuing banks from effecting payment under the L/C, irrespective of complying presentations. The relevant articles are as follows:

L/C fraud is deemed to be established if any one of the following situations occurs:

(1) The beneficiary forges documents or submits documents with false contents;

(2) The beneficiary fails to deliver goods maliciously or delivers goods with no value;

(3) The beneficiary and the applicant or other third party conspire to present fraudulent documents without a genuine underlying transaction;

(4) Other circumstances that involve L/C fraud."

The applicant, issuing bank or other interested parties might, on the occurrence of any circumstances stipulated in Article 8 of these provisions and having the view that such circumstance may cause irreparable damages to it, apply to the People's Court (which has jurisdiction over the matter) for suspending payment under the L/C."

However, pursuant to Article 11(5), no stop payment orders are to be granted if any of the exceptions stipulated in Article 10 apply. Article 10 states:

Once the People's Court confirms the existence of L/C fraud, it shall suspend or terminate the payment obligation under the L/C unless any one of the following situations exists:

(3) The confirming bank has performed its payment obligation in good faith; or

(4) The negotiating bank has effected negotiation in good faith."

In addition, pursuant to Article 9, the applicant for a stop-payment order has to prove that irreparable damages will follow if the stop-payment application is denied by the courts, e.g., to demonstrate that once payment was made to the fraudster, it would be unlikely that the applicant could recover the money, even if it received a favourable judgement.

In all three cases, presented documents were negotiated by the nominated banks, which fell within the exception stipulated in Article 10(4). Moreover, reimbursing the negotiating bank would not have created irreparable damage to the L/C applicant, since the fraudster had already taken the money and absconded. Unfortunately, the Intermediate Court, without giving any valid ground or providing evidence of fraud, granted stoppayment orders in all three cases.

The negotiating banks lodged their objection applications with the High Court which, pursuant to Article 13, had to render its review decision within ten days after receipt of these applications. However, the High Court held that the clock would not start ticking until the files were transferred from the Intermediate Court (i.e., the 10-day period would not start to run until the High Court received the files). This interpretation of Article 13 was obviously contrary to the wording and spirit of the Provisions.

Accordingly, the negotiating banks lodged complaints with the Supreme People's Court in Beijing, contending that there had been wrongful granting of the stop-payment orders, as well as a misinterpretation of the 10-day rule stipulated in Article 13. Eventually, all three stop-payment orders were lifted, and, in due course, the negotiating banks all recovered the L/C proceeds. In theory, negotiating banks can also claim losses and damages, e.g., late payment interest from applicants who have put up security in the local courts supporting their stoppayment applications.

Similar to the three cases mentioned above, the negotiating banks' position should have been legally protected under Articles 9, 10 and 11 (i.e., no stoppayment order should have been granted, since the documents were duly negotiated by the nominated banks, and such a refusal would not have created any irreparable damage to the applicant.) Unfortunately, given the substantial consideration and fraud involved, stop-payment orders were repeatedly granted. In one of these cases, the High Court also upheld the decision of the Intermediate Court, irrespective of the obvious violations of Articles 8, 9, 10(2), 10(4) and 11 and the objection of an issuing bank that maintained it was obligated to reimburse the negotiating bank, since it had accepted the documents and confirmed the maturity dates in writing.

Although the Provisions do not provide for any appeal mechanism against a decision rendered by the High Court - the court which is one level above the Intermediate Court in the present case - pursuant to Chinese legal advice, the aggrieved party may be entitled to have a wrong decision rectified under the civil laws and regulations of China. Otherwise, the reputation and integrity of L/Cs issued by the banks in China and the Chinese judicial system will be jeopardized and the protection afforded foreign investment in China will be seriously questioned.

The international banking and business communities remain watchful concerning how this case will develop. Given its substantial legal and economic impact, this writer hopes the Supreme People's Court of China will review the lower court decision and uphold the integrity of the Provisions, as well as the reputation and integrity of L/Cs issued by banks in China. Readers of DCInsight will be kept informed.

King Tak Fung is a Banking Partner of DLA Piper Hong Kong, a member of the ICC Consulting Group on the UCP 500 Revision and author of Leading Court Cases on Letters of Credit (www.iccbooks.com) and UCP 600 - Legal Analysis and Case Studies (www.peer.com.hk). His e-mail is kingtak.fung@dlapiper.com/fkt@sunitec.com