I have been in trade finance more than 20 years. In all that time, I can't remember the trade business getting as much press as it has in the past six months. On the whole, the news has not been very good. 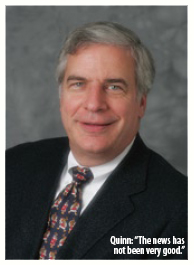 High-profile publications like the Wall Street Journal, the Financial Times, and the New York Times run multiple features on the dearth of trade finance available to exporters and importers globally. Each article looks at various aspects of this crisis - credit constraints, rapidly falling levels of merchandise trade, unhealthy banks, increased regulatory scrutiny - and shows their negative impact on the global trade community. The same confluence of factors is driving down the utilization of trade finance in the North American market.

From a North American perspective, trade finance encompasses letter of credit issuance for importers who are customers of the bank; advising and confirmation of L/Cs on behalf of the bank's overseas correspondents; provision of both pre- and post-shipment financing to exporters; and providing overseas correspondents with financing to support their customers' dollar-denominated trade finance requirements. Not all banks engage in all of these activities, but they may play in many, depending on their size and market position. Though this article is centred on letters of credit, other "financing" products have significant domestic and international implications for L/Cs.

No "one size fits all" criterion determines whether trade finance is available or not to buyers who are importers in the US market; what matters most is the buyer's underlying need. Large corporate investment- grade buyers (over USD 1 billion in revenue) have no lack of willing import L/C providers. However, based on their volume of spending during the past six months and their forecast of needs for the remainder of 2009, market feedback indicates that their dollar and transaction volumes will either be flat to last year - an optimistic take - or down in the range of 15-25 per cent.

Market participants do not anticipate the level of cancelled orders and expired or partially drawn L/Cs that the industry experienced last year. For the most part, customers have now factored reduced demand into their operating plans. Even if sales improve through this cycle, importers will be unlikely to increase either their overseas purchases or their reliance on L/Cs. Given the timeline from production to their shelves, they will instead source either domestically or through the well-established vendors in their supply chain who are operating on an open account basis. In fact, big buyers are now engaging in supply chain finance programs that will help their downstream suppliers - both international and domestic - to secure post-shipment financing at more attractive rates.

Although supply chain financing was previously used to extend days payable outstanding on open account shipments, buyers today care more about providing liquidity to their strategic suppliers without resorting to cash in advance. This reflects the increasing difficulty encountered by small- to medium-sized enterprises in securing credit and in paying a reasonable price for it, even if they are creditworthy.

Middle-market importers, while forecasting similar declines in volume, are able to access trade finance at current or reduced levels. But they could be challenged if their needs should suddenly increase over prior year levels. Because the secured borrowers who constitute a significant percentage of the middle-market customer profile have stable to lower borrowing bases due to reduced sales, they also have less collateral. As every borrower is scrutinized more closely than ever before, the availability of increased credit becomes more problematic. Even seemingly benign credit requests, such as L/C applications, are currently viewed as risky because of fear the supplier may be unable to produce the product or the buyer may be unable to sell the product even if it is delivered. Feedback from various committees of the International Financial Services Association (IFSA) indicates that, in general, banks are experiencing similar declines based on their own target markets and credit appetites.

Merchandise trade as measured by the US Department of Commerce began to shrink dramatically in the fourth quarter of 2008, with what had been robust export sales for US companies during much of 2007/8 wiped out by the falling dollar. This trend has continued into 2009, with the World Bank expecting merchandise trade to shrink globally for the first time in recent history. With global demand so drastically reduced, US exporters' volume activity has continued to decline accordingly.

To better understand these dynamics, US exporters should be addressed in the same "size" context as the import community. Their challenges are similar. Major exporters - primarily the large investment grade companies - continue to deal primarily on open account terms with their few remaining major overseas buyers. The challenge for these exporters is the lack of financing that their overseas counterparties have previously relied on to make purchases. Local financing, when available, is typically just as expensive as the supply chain financing mentioned earlier, and significantly increases the allin cost of the goods to be imported.

In order to mitigate the loss of major sales, these exporters are increasingly turning to the United States Ex-Im Bank to arrange medium-term financing for their overseas buyers. Ex-Im's process and fee structure had often dissuaded companies from using the programs in the past. Now we see major companies engaging Ex-Im for support on capital goods transactions in the USD 100 million- plus range. Other private insurance programs have been utilized as well, but with the elimination of a large insurer such as AIG (which has borrowed more than USD 150 billion from the US Government to stay afloat) from the trade finance market, the remaining players are challenged in the areas of pricing and capacity.

Similarly challenged by falling demand for their products, middle-market exporters have grown much more cautious. They are demanding confirmed letters of credit from most, if not all of their trading partners, including those formerly on open account terms. This is increasing the cost of their products to their ultimate buyers. The appetite of US banks for the credit risk of overseas correspondents that are not major international players has been reduced or eliminated, further shrinking the pool of available risk mitigation through confirmations.

Alternatively, given the smaller dollar value relative to major exporters, an Ex-Im program is not as cost effective and efficient to support their sales. Guarantee programs sponsored by other multinational and governmental organizations such as IFC, EBRD, EDC, KEIC, and Sinosure, which banks can access for certain high-risk countries, have become an increasingly important source of additional risk mitigation. Some programs providing risk participation (ONDD, ADB) require the requesting bank to hold some of the exposure on its balance sheet. This may prove challenging, depending upon the bank's risk appetite.

In the wake of these developments, trade finance in the US context - making dollar-based loans to overseas financial institutions - and export letter of credit activity in the US market have now reached a point of confluence. Foreign financial institutions, constrained by the limited credit available from their US correspondent banks, have much less ability to provide their customers with import finance. In some cases, the toxic mortgage-related assets on their books preclude US banks from using their capital on international transactions. Other banks, although willing to continue lending to their correspondents, lack the capacity to meet demand because they can no longer rely upon the secondary market to distribute risk. Since the fourth quarter of 2008, when the secondary market became moribund, there have not been enough risk takers in the market to maintain strong flows of liquidity.

Though now improving by the day, the volumes being traded in these markets are down 50-75 per cent from their peak. A small number of banks have "disappeared" - either through bankruptcy or becoming "wards of the state" - further diminishing capacity in the market. Without the ability to finance their purchases at cost-effective rates, buyers in emerging markets either seek alternative local suppliers, stagnate because they cannot grow their business or go out of business completely. This perpetuates the decline in developed world exports and contributes to forecast reductions in merchandise trade.

As a global trade bank, J.P. Morgan is using all available levers - guarantee programs, insurance, secondary market distribution and our own balance sheet - to meet the import, export and correspondent bank finance requirements of our customers. Though market pricing has increased significantly compared with last year at this time, we do see cross-border risk costs down from their peak in November-December 2008, and they are beginning to stabilize. We realize there will be continued scarcity of capacity and price volatility through at least year-end 2009 and perhaps into early 2010. However, since global trade continues and is key to a global economic recovery, we believe that providers and customers must continue to work together to keep supply chains healthy through funding, liquidity and risk mitigation - both in the face of current challenges and in readiness for more positive direction in the markets. The historical record shows that in the world of trade, good news always arrives eventually.