﻿ Article: How L/Cs are faring in the economic turmoil: a view from four countries - Europe: "The crisis could well enhance the position of the L/C" Author: by Kim Christensen Published in: DCInsight Vol. 15 No.2 April - June 2009 Link: http://localhost:82/content/tfb/DCInsight/DCI_Vol15n2_4Countries_EU.htm?l1=Trade+Finance&l2=DC+Insight&l3=DCInsight+Vol.+15+No.2+April+-+June+2009

Europe: "The crisis could well enhance the position of the L/C" 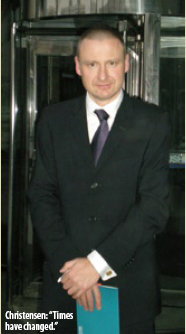 The range of responses

When asked about the impact on L/Cs and whether trade volumes have increased or decreased during the crisis, European trade finance bankers offer a range of responses: some say that business has been "status quo"; others that they have experienced "a small increase" in business; still others respond that the crisis has resulted in "a total catastrophe". In fact, there seem to be two different trends acting on the L/C instrument:

- Some deals have simply fallen through. It may be that the buyer has gone bankrupt or has been squeezed by a liquidity crunch and has been unable to find a bank willing to issue an L/C. In these cases, there has clearly been a decrease in the volume of L/Cs issued.

- In other cases, perhaps the financial rating of the counterpart has changed or the market price for the commodity has dropped, or unpredictable fluctuations in the market have led to an uncertain framework within which the parties must act. This can mean that deals that were handled previously by other payment instruments are now moving to L/Cs, increasing the total L/C volume.

On balance, at least in the short run, it appears that the L/C has become more popular as a safe haven for European trading partners in turbulent financial times.

Clearly, the financial crisis is not necessarily a threat to the L/C. There are, however, some potential threats. There is often a significant difference between how the L/C should work in theory and how it works in practice. A large number of L/C documents still do not comply, and one potential consequence of presenting discrepant documents is that payment will never be received. What is the point of paying for security when one does not actually receive it?

L/C document examination is a risky business; if a discrepancy is missed, a loss may have to be booked. One can argue that it has always been like this, which is perfectly true. Still, something has changed in the last year or so. Generally, if money is lost in an L/C transaction, except when this is due to a default by a bank or country, two conditions must be present: a valid discrepancy must be overlooked and the buyer will decide that it does not want the goods - or is willing to risk the business relationship by demanding a reduced price.

Less than a year ago, the risk of both conditions being present was low. Banks' confidence in their document checkers was generally solid. And banks felt secure that if they knew and trusted the beneficiary (their customer) the commercial agreement and the relationship between the parties would remain strong.

But times, as I said, have changed. Consider the following two recent examples.

A European bank confirmed an L/C (covering stainless steel) issued in favour of one of its best customers. The bank negotiated the documents without recourse to the beneficiary. The presentation was refused by the issuing bank, which cited a valid discrepancy overlooked by the bank.

From the time the L/C was issued to the time of delivery of the goods, the commodity price for stainless steel dropped as a result of the financial crisis. As a result, the buyer would only waive the discrepancy against a considerable price reduction, and the European bank had to accept a loss of 15 per cent of the document amount.

In another case, this time involving heavy machine tools, the nominated bank (a European bank) was informed that the buyer no longer wanted to receive the goods. The L/C was unconfirmed, but the bank decided to examine the documents and told the beneficiary that because any small and insignificant mistake in the documents would likely result in non-payment, the documents had to be "more than perfect". Eight experienced document checkers examined the documents. They presented the beneficiary with a long list of items showing what should be corrected, most of which would clearly not be deemed valid discrepancies by the ICC Banking Commission. The documents were corrected by the beneficiary twice, meaning they were examined and discussed by eight bank employees three times!

A short time ago, most European document examiners had an almost mathematical approach to examining documents. But the financial crisis has altered all that. In the present environment, missing a discrepancy increases the risk of losing money. The result: document checkers are compelled to be much more careful these days.

In Europe, the financial crisis is also having an impact on the content of L/Cs. This is most noticeable with regard to provisions concerning when payment must be received and/or made. Two variations have become common - both related to the reimbursement instructions in the L/C.

The first of these is that a nominated bank (especially when it is also a confirming bank) generally requests (demands) a stricter procedure regarding its access to the funds once a complying presentation has been made. For example, the bank may request that an electronic reimbursement instruction be included in the L/C before it is willing to act under it. The result is that the buyers will be forced to pay sooner than they normally would.

The other is that the time span between the time the nominated bank has accepted the documents and the time the funds are available is increasing. This means that more L/Cs are stating that reimbursement can be claimed seven or even ten days after sending the claim, only after which the reimbursement authorization will be issued. Clearly, in these cases the issuing bank's intention is to create a situation in which it will be able to examine the documents before the funds are released. This means that the beneficiary will be paid later than he normally would be.

In many ways, the financial crisis came as a shock to trade finance departments in Europe, causing fear and leading to extreme care in examining documents. Though predictions on how the crisis will evolve would only be guesswork, I will hazard a few comments. One is that a balance may well be established, wherein trade finance banks will act, not based on feelings and fear, but on the basis of information and knowledge. If that is the case, the crisis will have had a positive side. It may also reinforce bankers' claims that the benefits of L/Cs, which banks have been telling their customers about for years, are, in fact, relevant and real. In the past, corporate customers have argued that they see no reason for L/Cs to be confirmed, since banks rarely go bankrupt. No doubt this perception has changed.

The crisis may impel corporate customers to establish a solid risk strategy, to decide how they will choose between the various payment instruments available, tailored to their individual trading and risk profiles.

In the end, then, the crisis could well enhance the position of the L/C. If the crisis has proven one thing, it is that strong and reliable payment instruments are still needed. Banks should realize that corporate customers do not necessarily use the L/C because they like it, but because the see the benefits in doing so. This is the time to remind customers of those benefits.

Kim Christensen, Vice President and Head of Trade Products and Business Relations at Nordea in Denmark, is a member of the ICC Banking Commission and Chairman of the ICC Denmark Trade Finance Forum. His e-mail address is kim.christensen@nordea.com