The aim of the revision of the ICC Uniform Rules for Demand Guarantees (URDG), (ICC Publication No. 458) of 1992 is to increase the use in practice of this important ICC instrument. 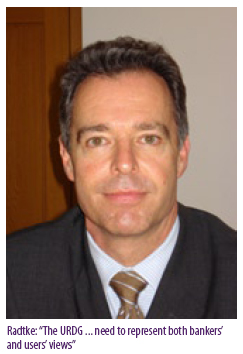 The first ICC publication on the subject, No. 385, the Uniform Rules for Contract Guarantees, did not find international acceptance, since these rules did not govern the widely used guarantees on first demand. The 1992 URDG cover these guarantees. Their worldwide use and acceptance is increasing; consequently, banks and businesses worldwide have a considerable interest in harmonizing today's demand guarantee practice.

In conformity with ICC's unique role as a rule maker, the revision is being undertaken jointly by the ICC Banking Commission and the ICC Commission on Commercial Law and Practice (CLP). It is the mandate of the CLP Commission, in keeping with ICC's general policy on ICC rules, to ensure that the URDG are a product balancing the interests of the banking world and the business world. If the URDG are to attract international use, they need to represent both bankers' and users' views.

Most ICC national committees have set up working parties on the URDG, composed of representatives of their leading banks and corporations active in world markets. These comments are sent to the URDG Drafting group and the URDG Task Force chaired by Dr George Affaki, one of the leading specialists in worldwide guarantee practice. The Drafting Group and Task Force have done outstanding work in collecting and analyzing hundreds of comments and drafting a new set or rules. The third draft was presented to both Commissions by the end of 2008 for comments by February 2009. The comments received on the third draft from national committees and the CLP Commission's URDG working group will be discussed during the next meetings of both the Banking and the CLP Commissions.

From the CLP Commission's point of view, there was concern that the first draft of the revised URDG closely aligned terms between URDG and UCP 600. For banks, such an alignment would facilitate the treatment of demand guarantees as payment instruments, since the same banking staff work on both guarantees and L/Cs. However, in our view this could cause unsuitable results, considering the fact that demand guarantees are not principally payment instruments. For businesses, most guarantees secure the execution of the obligations in the underlying contract.

The second draft addressed this concern, allowing work on the draft to concentrate more on substantive and policy issues. The numerous comments received by the Task Force and the Drafting Group constitute a valuable input of information concerning international banking practice. A consensus seems to have been reached with regard to international standards to be adopted by the revised URDG as far as banking practice is concerned. This harmonization is already a remarkable achievement of the revision process.

The CLP's position on the third draft

Comments from users received by the CLP Commission's URDG Working Group on the third draft indicate that the following key issues are crucial to ensure acceptance of the new rules by the business community.

Article 16: information about the demand

In our view, the comments received from users of guarantees reveal that sub-article 16 (b) of the third draft, which states that that the guarantor is not required to give information before making payment, should be deleted, since it contradicts sub-article 16 (a) which, at present, states that the guarantor shall, without delay, inform the instructing party of a demand.

Without in any way compromising the independent nature of the guarantee, immediate information about the demand before payment provides the instructing party with the opportunity to contact the beneficiary and to sort out any commercial problems which might have provoked the demand in the first place. Far from prejudicing the efficacy of independent guarantees, the duty to immediately inform the beneficiary about a demand before payment enhances the utility of the guarantee as a financial instrument that will improve commercial relations among users. At present, this is worldwide practice.

The CLP Commission has also been concerned about wording in the introductory notes to the third draft, stating that the only "motive" behind the requirement of information is to provide the instructing party with time to obtain an injunction. The CLP Working Group received comments on this point from companies having used thousand of guarantees per year over a period of 20 years or more. It was the unanimous view of these users and their legal advisers that injunctions were not the motive behind the duty of the guarantor to inform the beneficiary before payment. Apart from the fact that such injunctions are, in any event, difficult to obtain, given the independence of demand guarantees, and that they cause undesirable legal battles, the simple fact is that it makes good commercial sense for the guarantor immediately to inform the instructing party of the demand.

In the final text, the CLP Commission believe that it should be made clearer that the guarantor's duty to inform the instructing party or counter-guarantor is the same duty as under article 16. Thus, in line with the above argument regarding article 16, the guarantor should "immediately" inform.

It is vital that the instructing party and the beneficiary be given time to consult with each other in order to resolve the dispute and avoid costly and timeconsuming litigation. Furthermore, by accepting an extension as an alternative, the beneficiary will not have required immediate payment.

If the guarantor intends to refuse an extension, the instructing party should, of course, be informed of this and of the reasons for such a refusal. This is just as important as information that an extend or pay demand has been received. The same argument applies to the counterguarantee.

This article highlights the substantive points the business community, through the CLP's Working Group, would urgently wish to see in the final text. Without the alterations suggested above, it could prove difficult for business users of demand guarantees to support the use of URDG. The changes suggested will further ICC's long-standing policy of producing international rules that balance the interests of the different business sectors engaged in international trade.

Christoph Martin Radtke, a partner in the law firm of Lamy & Associes, France, is Chair of the Commission on Commercial Law and Practice of ICC France and Chair of the CLP Working Group on URDG. His e-mail is christoph. martin.radtke@lamy-associes.com