The EBRD and trade finance in Central and Eastern Europe

The European Bank for Reconstruction and Development (EBRD) was established in 1991 in response to major changes in the political and economic climate in Central and Eastern Europe. Today the Bank works in 29 countries from Central Europe to Central Asia, and it is preparing to invest in countries in the southern and eastern Mediterranean region. The EBRD is a multinational institution set up with the specific aim of assisting countries to develop into market-oriented economies. Its 63 shareholders include countries from both the operational region and the rest of the world, plus the European Union and the European Investment Bank (EIB). 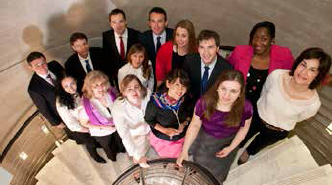 Aside from the EBRD's regional focus, one advantage of the Bank lies in its ability to operate in both the public and private sectors, and to have at its disposal the broadest range and flexibility of financing instruments. The Bank is equipped in its staff and range of instruments to support the different stages of transition. Specifically, the EBRD seeks to promote the development of the private sector within these economies through its investment operations, and through the mobilization of foreign and domestic capital.

In 1999, the EBRD launched the Trade Facilitation Programme (TFP), the first of its kind. Since its creation, the TFP has helped companies in the EBRD's countries of operations to engage in trade, by providing guarantees for international trade transactions. By bringing liquidity to these markets, especially during challenging times, the Programme has enabled issuing banks to continue lending and companies to keep trading.

Since 1999, the TFP has facilitated more than 11,600 cross-border trade transactions worth a total of EUR 7 billion. The Programme is particularly active in the early transition countries (ETC). Banks in these countries will remain the key beneficiaries of the Programme in the foreseeable future.

The recently introduced TFP e-Learning Programme provides for the transfer of the latest know-how in trade finance and offers staff of active issuing banks up-to-date technical assistance and training that reflects the latest trends in the trade finance industry. The online courses are particularly popular among professional trade finance staff because they allow them to study in their own time and keep them up to date with the latest developments as additional courses are added.

The TFP supports business based on the following specific selection criteria: terms and conditions must reflect sound banking risks, and private funding must not be available on reasonable terms. The project must be environmentally neutral or beneficial and socially responsible, as well as respectful of the rights and needs of communities.

One example of an intra-regional transaction was the import of industrial equipment for the manufacture of vehicles and trailers from Turkey to Russia in 2011. In this transaction, the NBD Bank in Nizhniy Novgorod issued a letter of credit that was confirmed by Commerzbank of Frankfurt, Germany. The EBRD provided Commerzbank with a guarantee for up to 100 per cent of the political and commercial payment risk.

One of the benefits of the TFP is the flexible nature of the Programme and the ability of the EBRD to combine forces with commercial partners to enhance their participation: for example, in 2011 a TFP guarantee was issued to cover 100 per cent of the payment risk of an advance payment guarantee issued by a Ukrainian bank to Deutsche Bank. Credit Suisse shares 35 per cent of the EBRD's risk.

This deal facilitated intraregional links and trade between Ukraine and Turkmenistan and was undertaken under market conditions where no commercial banks had the appetite to take risks. The EBRD successfully invited Credit Suisse to share 35 per cent of the EBRD's risk, demonstrating that the EBRD is ready to cover risk which cannot be covered wholly by the commercial market.

The financial crises of 2008-09 led to a sharp reduction in world trade and trade finance, but around mid-2010 trade finance volumes in EBRD's countries of operations started to recover, and this upward trend continued well into the first half of 2011. Positive sentiment in trade finance was supported by robust economic growth in emerging markets, particularly outside Europe, as well as by rising commodity prices.

Commodity exporters, such as Kazakhstan, Mongolia and Russia, saw increases in trade flows, and also in some cases significant increases in capital inflows (with Russia being a notable exception). More broadly, increased consumer confidence in the region has led to an increase in domestic demand for consumer goods and an associated increase in imports.

Nevertheless, the market outlook for trade finance in 2012 is generally gloomy. The crisis in the eurozone is taking its toll, leading to more binding financial constraints, and is likely to further reduce the availability of commercial trade finance lines.

Banks in Central and Eastern Europe, in particular, will have to deal with reduced trade finance limits. Banks in countries which already had difficulties receiving sufficient lines before the latest financial turmoil are unlikely to receive new limits or limit increases for their trade finance business.

The latest ICC-IMF survey of almost 500 financial institutions worldwide confirmed a bleak picture for trade finance in 2012 (page 2 of this issue). Unsurprisingly, while the outlook for Asia is still relatively strong, the outlook for the eurozone was particularly weak. Almost 59 per cent of respondents in emerging Asia expect trade finance conditions to improve in 2012, while in the eurozone only 16 per cent envisage any improvement, and almost half of respondents expect things to get worse.

Central and Eastern Europe has the second-highest number of those with a pessimistic outlook, at 28 per cent. This pattern creates a bigger problem for global trade than first meets the eye. According to the survey, as much as half of the trade finance products offered by banks worldwide (ICC and IMF Market Snapshot, January 2012, based on December 2011 figures) come from eurozone banks. The latter's increased constraints could therefore have a negative impact globally on trade finance.

The main factor in the negative outlook stems from the reduced availability of credit at counterparty banks. This factor was singled out as a major risk by 42 per cent of respondents to the ICC-IMF survey. Many were also concerned about potentially shrinking demand for trade finance, both as a result of lower trade volumes (28 per cent of respondents) and a move to cash in advance transactions.

In short, in view of the ongoing economic challenge there is a certain need in the coming months and years for a facility that is well-supported, expertly equipped and well-positioned to promote, develop and underwrite trade among the growing economies of the early- and mid-transition countries of Central and Eastern Europe and Asia, and the southern Mediterranean region, and to draw in commercial partners with it in the process. The EBRD is ideally positioned to fulfil this, and the Trade Facilitation Programme is already demonstrating an enviable track record, in providing this role. It remains to be seen, however, just how much confidence can be built