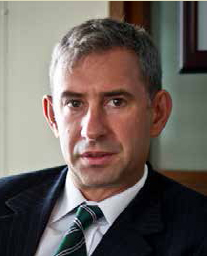 Beck: "We focus on the most challenging markets"

The ADB and trade finance in developing Asia

DCI: Could you briefly recount the history of the TFP, ADB's trade finance program - when and why it was started up and what its main focus is?

Beck: The trade finance program (TFP) of the Asian Development Bank (ADB) was approved by the bank's Board of Directors in 2003 in the wake of the Asian financial crisis. TFP provides guarantees and loans through banks to support trade. It was more or less operating as a shell until 2008 when we really started to ramp-up the program.

In the midst of the global financial crisis, there was a great deal of concern in the international community about the dramatic drop in trade volumes and concern that part of the reason for this could be attributed to a lack of trade finance. So, in 2009, ADB approved the substantial ramp-up of its trade finance program.

DCI: What kind of money are we talking about?

We are really focused on supporting trade with the more challenging markets, so ADB's trade finance program does not assume risk in India or China or Thailand. Of the 16 markets where TFP operates, we're most active in Vietnam, Pakistan, Bangladesh and Sri Lanka.

DCI: In the TFP , how does the ADB cooperate with private banks?

Beck: TFP provides guarantees and loans to banks to support trade. We work with over 200 banks. We support their efforts to finance trade in the most challenging Asian markets. To leverage our own limits and therefore bring more support to partner banks, we have risk-sharing arrangements with Swiss Re Insurance. We also have an arrangement with Australia's export credit agency and FMO, a government owned development bank out of the Netherlands.

DCI: The latest global survey with ICC on trade finance seems to say that the volumes and the value of trade finance transactions looked brighter in 2011. Was that the case in the Asia-Pacific region?

DCI: You said the gap has become bigger. That means the market in trade finance has not really recovered to pre-crisis levels.

Beck: We don't think so. That is what we are hearing anecdotally and that is what we are seeing in terms of the demand for the trade finance program. That said, we cannot quantify what the gap is. But we are in the process of making an effort to do just that. We are going to be conducting a study later on this year that will attempt to quantify the gap in trade finance and link that gap to the lost economic growth and job creation opportunities.

DCI: Is there any indication of a link between the European financial crisis and trade finance transactions in the Asia Pacific region?

Beck: Yes, the European banks have played a fairly large role in supporting finance for trade into Asia, and the weakened position of many of the European financial institutions has contributed to the enlarged gap of trade finance in Asia.

DCI: What are the main problems remaining? Is it the need for banks to raise more capital, is it the fact that banks are shedding trade finance assets, is there a shortage of dollars?

Beck: I think the coming together of three developments has contributed most to this enlarged gap. One is a general deleveraging going on in the international economy, largely spurred on by the bursting of the housing bubble. This deleveraging, whether it is a short-term phenomenon or the new normal, has really taken a lot of financial resources out of the economy that could have otherwise supported trade and other economic activities.

A second one is regulatory requirements, especially Basel III and its treatment of trade finance, which is also having an impact on the large gap.

Third is the requirement for banks, certainly European banks, above and beyond the regulatory requirements, to increase capital.

It's the confluence of these three developments that contributes to an enlarged gap for trade finance. As there are persistent gaps for trade finance in the markets where TFP operates, these factors exacerbate the problem.

DCI: With regard to Basel III and its credit conversion factor of100% on trade finance, what are the consequences of that for having capital available for small- and medium-sized enterprises in developing countries?

It is having a pretty major effect on SMEs, as you are suggesting, and that, of course, should be a big concern for everyone, because small- and medium-sized enterprises are major engines for job creation.

DCI: Do you see any evidence of flexibility on the part of the Basel committee on this matter?

Beck: As a result of the work that the ICC and the ADB did together to start the trade finance default register, we now have a substantial grounding on which we can have a serious discussion with Basel, and we hope that serious discussions with the Basel Committee will continue.

Out of the discussions we've had so far, we have seen some concessions on the part of Basel that were announced last October. We still do not have the major concessions that we're looking for, which relates to the CCF, concerning leverage. We are continuing to work on that.

DCI: It's obvious that ADB has taken on a major role in trade finance these last few years. What would have been the situation with trade finance in developing Asia if the ADB had not stepped in to offer loans and guarantees in these markets?

Beck: ADB's resources are small compared to Asia's requirements for trade finance support. It's for this reason that our strategy is to focus on markets where we can have an effect, rather than pouring resources into China, India and Thailand where financial markets are relatively developed and the TFP's impact would be small. So I like to think the TFP has made a difference in markets like Bangladesh, Pakistan, Nepal, Mongolia, Sri Lanka and others.

It's not just the value of the transactions that TFP brings. What's more important is the sustainable element that follows and does not rely on ADB's TFP. For example, we have helped international banks move into Bangladesh and Mongolia for the first time. At first we provided introductions and guarantees of 100%. But over time, ADB's TFP was not needed, because the international bank got comfortable with assuming risk on its own in these two countries. This is truly sustainable development.

DCI: Is there some concern that ADB may not have the resources in the future to fill the gaps in trade finance?

Beck: The demand on the program is substantial and outstrips our capacity, which is why it is important for us to bring in many players, like private insurers, export credit agencies and other entities, so we can ensure that the financial support for trade is there.

DCI: Are you confident that you will have those resources?

Beck: There is broad agreement about the importance of trade to keep the economy going, to create jobs and to bring countries out of poverty. So I am confident that multilateral development banks, including ADB, working in partnership with individual governments and the private sector, will find the resources required to support trade.

DCI: Looking down the road a few years, how do you see the TFP developing? Are you planning to add more countries in which you operate?

Beck: We operate in 16 countries throughout Asia, including Central Asia, in markets like Uzbekistan, Mongolia, also in the Caucasus, we are working in Georgia and Armenia. We continue to grow geographically. We are in the process of expanding in Tajikistan, Kazakhstan, Turkmenistan and into the Pacific island countries.

In terms of other features, we are seriously looking at expanding capacity to support transactions that will be denominated in renminbi and in Indian rupees.

We are also in the process of considering a supply chain financing program that would be different, but complementary to what we are doing in trade finance l

Steven Beck is Head of Trade Finance at the Asian Development Bank and Senior Advisor to the ICC Banking Commission. His e-mail is sbeck@adb.org